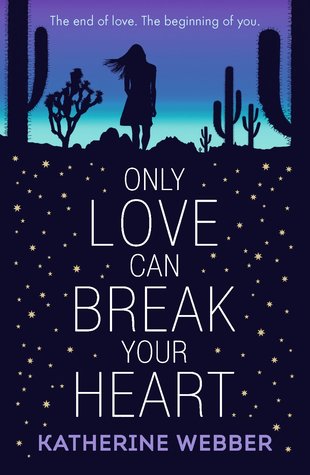 Reiko loves the endless sky and electric colours of the Californian desert. It is a refuge from an increasingly claustrophobic life of family pressures and her own secrets.

Then she meets Seth, a boy who shares a love of the desert and her yearning for a different kind of life. But Reiko and Seth both want something the other can’t give them.

As summer ends, things begin to fall apart. But the end of love can sometimes be the beginning of you.

Enter the lovely Star who read and reviewed Only Love Can Break Your Heart on my behalf.

There were a lot of things that this book could have tackled – the loss of a loved one (a sister), but instead, this book, to me, chose to focus on all of the wrong things.

Reiko is a 17 year old girl, who misses her older sister, Mika, who died when she was 14 and Reiko was 12. But Reiko still sees Mika, and still talks to her, but she is frozen in time – forever 14 years old.

One day, Reiko goes rock climbing in the middle of the night – something she does to clear her head, and she meets Seth Rogers, a boy from her class.

From that moment on, the book is so heavily focused on Seth and Reiko that I found it frankly quite ridiculous.

Reiko doesn’t know how she feels regarding Seth, and every time she tries to come to terms with her own feelings, things get taken out of proportion, resulting in her being dumped on the night of the Homecoming dance.

I would have liked to have seen this book actually deal with Reiko’s lack of processing her grief towards her sister’s death, but instead this book was so forceful in its focus on Seth+Reiko. Their relationship was toxic, to me, from the start, and the way it ended was, frankly, exactly how I thought it was going to end.

In the end, Reiko barely processes her grief, she decided that she’s fine to talk about Mika with her family, despite having not uttered her name to them out loud for 5 years, and then that’s it. Story over. There was no growth, no development, nothing to say that this character had actually leaned anything about herself, other than the fact that she is definitely grieving her sister, but she was a spoiled brat the entire time from start to finish, and I expect she’ll continue on like that for the rest of her life.

2 thoughts on “Only Love Can Break Your Heart: Review”