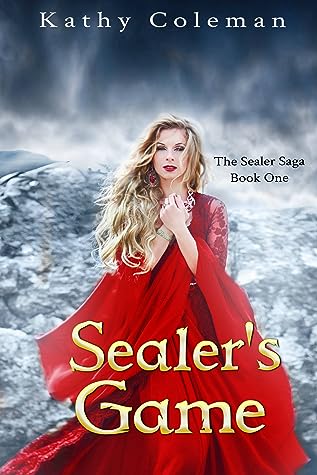 As Champion, Carita of Bel Auryn thought she would spend her days fighting demons. Instead, she is drawn into the latest scheme of the Moon Goddess, Ruby: a contest to choose a man who will have the “honour” of fathering her child. When Ruby encourages Carita to choose a man for herself, she picks the man she is most drawn to–and immediately regrets it.

Lucian Veradayne is the Lord of Death. He knows he must win Ruby’s game at any cost. It doesn’t matter that he has avoided her for two thousand years. Nor that she tried to kill their first child. And it really doesn’t matter that he would much rather woo Carita. The Soul Well has given Lucian a prophecy: he and Ruby must have another child. A child who will save the world.

Dealing with their mutual attraction will be the least of Lucian and Carita’s problems. They are not the only ones who have been drawn into Ruby’s game. Someone else wants to win. Someone who wants Ruby dead. Will Carita and Lucian be able to protect her long enough for a victor to be named? And if they succeed, will they be able to walk away from each other to ensure the prophecy is fulfilled?

Sealer’s Game is a 55,000 word fantasy romance novella about the King of the Underworld, a kick-butt warrior priestess, and a ruthless goddess who will stop at nothing to get her own way. It contains language, descriptions of violence, and sexual themes that may not be appropriate for all readers. Recommended for ages 18+.

Where to start. I wouldn’t call this an 18+ read. More like a 15+. A mature audience warning, rather than being rated R. I’ve read darker battle scenes and stronger sexual themes in YA. It’s the baby murder in the prologue, that gives it the MA15+ warning from me.

I’m going to have to address it straight up. I found the Prologue destressing and would have stopped reading the book had it not been that I was part of this blog tour. I am glad I kept reading because overall, I did end up being entertained and found the Sealer’s Game to be a quick, easy and enjoyable read.

The realm most of this story takes place in in Zynedia. Kindred are to Zynedia, what humans are to Earth. Earth does exist but it is another realm. A Sealer is what the gods are, their species, like human, or kindred, or bear, or rabbit etc. There is a Greek style Underworld and the dead from Zynedia and Earth end up there. The Sky realm isn’t visited in this story, but I’m sure it will be explored as the story continues in later books. My explanation might seem confusing, but it’s quite easy to follow as the story progresses. Remember I called it a “a quick, easy and enjoyable read.”

The story cycles through three points of view; Ruby, Carita and Lucian.

The first character we meet is Ruby. We’ve just meet Ruby and she’s already murdering a baby she just gave birth to. Yep it took me a while to come back from that and I never really ended up warming to her character (big shock there).

I think in the Prologue you are supposed to feel Lucian is the bad guy? But being that he tried to save the baby and was willing to love it anyway, he felt more like a good guy, even though he was the ruler of the underworld. Lucian Veradayne, the Lord of Death. Hades, he is essentially Hades. There are Greek god vibes all through this book, and that I was into. Even when Ruby was explaining the different realms to Carita and her history with Lucian. I was still left feeling he was the good guy.

To Ruby, Men are nothing but playthings, which I was okay with – It’s the graphic baby killing bit where she lost me. The ice-cold goddess seemed to warm to her mortal servant, and they sort of became friends, kind of.

And that leads us to Carita. Carita is a kindred (think human). I liked Carita. She was traded to the moon temple by her royal parents as a child, for a potion to allow them to conceive a health son. She was a damn princess before becoming a priestess. Hello warrior princess, I see you. She’s spent her life training to be a strong warrior so one day she might be picked by Skye Goddess Ruby as her champion (Champion = protector/maid/squire/toy/go-kill-that-man. Murder slave!)

Conclusion. This book has a Hitmen, secret agreements, fierce women and a prophecy that demands the birth off a child who is of both the underworld and the sky realm – who of cause will be the key to saving all the realms. Harrah! By the end I did feel like all three of the POV characters were hard done by thanks to the damn Prophesy – but that’s prophecies for you. And yeah, I did have some issues with it, but overall! I did end up being entertained and found the Sealer’s Game to be a quick, easy and enjoyable read.

Did the baby get conceived? What becomes of Carita and Lucian’s feeling for each other? You’ll have to read Sealer’s Game to find out.

Kathy Coleman lives in a little town in Ontario with her parents, one younger brother and two mischievous little dogs named D’Argo and Coco. She attended Trent University, majoring in English and Cultural Studies.
When she is not being kept awake at 3 a.m. by characters who refuse to quit talking, she can be found performing karaoke at charity events, updating her book blog I Write, I Read, I Review, shopping, or playing video games.
Twitter | Facebook | Instagram | Goodreads | Website
Thanks for visiting sarahfairbairn.com 🙂