I’m only setting myself a total goal of 60 books to be read for my Goodreads challenge in 2017, which will be half of what I’ve read this year, but with baby number two just arrived it is probably as much or more than I’ll be capable of.

The Australian Women Writers Challenge is all about promoting the wonderful works of our female Aussie authors.

I was going to set myself the goal of 12 AWW books for 2017, as that’s only one a month. But early in the year I think I might struggle to get even one book read a month. I really don’t know how I’m going to handle the two kiddlets and I’ll be returning to work earlier with Ethan than I did with Riley (we were renting the first time around, but we’re home ”owners” now and that costs quite a bit more per month – and there’ll be one more month to feed). So I decided to sign up to read 6 and any I read and review over that amount will be a bonus.

I have purchased a fair few #LoveOzYA books this year most of which are by lovely ladies I’ve seen speak, personally met or connected with online. #AWW2017 is an awesome reason to move them higher up my never-ending To Be Read list.

Our second little man has entered the world! I had a spare five minuets so I though I would share my good news.

Ethan was born at 11.50 am on the 14th December. He weighed a whopping 4.42 kilograms (9.7 pounds), we already knew he was going to be big, as was his brother. He is big, beautiful and healthy and we are happy to be all home together.  So far Riley has warmed to the idea of being a big brother. But as an only child I am now in uncharted sibling territory.

My mother knitted a Christmas hat and stocking specifically to take some cutesy photo’s of Ethan to print out for all the great grandparents and aunties. This is a big thing! My mother doesn’t knit! But we got the shots, so her effort paid off.

Anyways, I’m going to go take a nap while I can. I wish you all happiness and health during the holidays. I will be back to book blogging as soon as I can ❤ 🙂 ❤

I know what you’re thinking; Woman what are you doing the year ain’t over yet. But come on! I’ve got a baby due and I’m still not ready for its arrival. If I do manage to do any reading from now until after new-years it will be a miracle.

Lynette Noni’s The Medoran Chronicles. I am super keen for the April 2017 release of the third book (3rd out of 5) Draekora. This series has it all; a fantastic parallel fantasy world, show downs between good and evil, tested friendships, a strong female lead, great supporting cast and MAGIC! It follows teen Alex as she discovers this parallel world and the strength to be the hero that it needs. Oh yeah and It’s written by an Aussie, #LoveOzYA what more could you want. Goodreads.

Brian K. Vaughan and Fiona Staples’s SAGA. If you haven’t heard of SAGA you must have been living under a rock for the past three years. This epic sci-fi/fantasy (for mature readers) follows new parents Marko and Alana (narrated by Hazel, their daughter) as they dodge those who don’t approve of their inter species family and seek to destroy them. Marko and Alana strive to create a loving family and figure out how parenthood works all while avoiding the battles going on around the universe due to a long running galactic war between their peoples. Goodreads.

Becky Albertalli’s Simon vs. The Homo sapiens Agenda. I finished this book with a smile on my face and a tear in my eye. I actually just sat on the couch and hugged the book. Read it! It’s heartwarming and beautiful and you can’t help but fall in love with Simon as you experience him grow and learn to accept himself. Goodreads.

Will Kostakis! Far out I love this fella’s writing. The Sidekicks & The First Third are two brilliant stand alone #LoveOzYA masterpieces. Both touch on family, friendship, sexually and growing up Aussie style – Ok, ok, Greek/Australian style when it comes to The First Third, but both are set in Sydney. Goodreads.

The Mother in me fell in love with Simon (Simon vs. The Homo sapiens Agenda) Bill (The First Third) and Thommo (The Sidekicks) I wanted hug them and make them feel better. Harley, bloody Harley (The Sidekicks) Harley is the boy I loved, the one that no matter how old I grow a part of me will always fall for. There of course were other wonderful characters in these books, but I am trying to keep this post brief LOL)

Christopher Currie’s Clancy of the Undertow. I saw so much of my teenage self in Clancy. Clancy is a beautiful, truly connectable character. The story touches on family, friendship and sexually, as you get to experience Clancy grow and discover who she is meant to be. It is a powerful and heartwarming read. Beautiful #LoveOzYA all the way! Goodreads.

Jessica Shirvington’s Disruption duology. This duology is brilliant. I read both books back to back in a few days. We get blackmail, bad guy bullshit and sassy bitch brilliance in 833 pages of utterly enthralling action. Lead character Maggie is a strong young woman that is not to be messed with and who you can’t help but fall for. #LoveOzYA Goodreads.

Ambelin Kwaymullina’s The Tribe series. I’ve still to read the last book in this series, I purchased it earlier in the year, but i’m too scared! I don’t want it to be over. This is a dystopian like no other I’ve read; for one thing it’s better then most other books I’ve read labeled dystopian. The series is fresh and exciting with strong leading female characters, a focus on friendship, connecting with the natural world around us, doing what you believe is right and protecting the ones you love. #LoveOzYA Goodreads.

Katherine Hurley’s Griever’s Mark series. I’m not sure exactly what it is about the first two books in this series that captivated me so. I’m still to read the third, fear of endings and all. But from the moment I finished reading the first book I haven’t been able to get the two main characters Astarti and Logan out of my head. So that’s got to count for something. I also really loved the earth magic that Hurley created. Goodreads.

Bellow are some of books I had hoped to fit in before bub was born, but haven’t managed to and thus will be top of my to-read list next year!

I really should hurry up and read Georgie Spider and Unbound, as there are way too many fictional characters with unfinished story lines running around in my head at the moment. 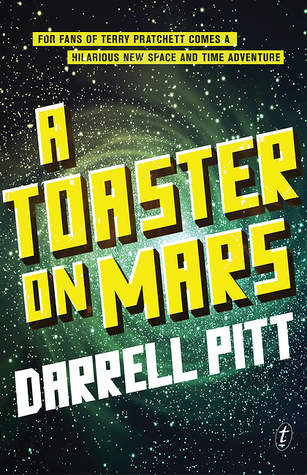 For fans of Douglas Adams and Terry Pratchett comes a hilarious new space and time adventure.

Teenagers on skateboards jumped off walkways, dropped a dozen floors and activated rockets to safely land walkways below.
Blake took a deep breath, inhaling something that smelt like a cross between burnt plastic and toffee apple.
Neo City, Blake thought. Home, sweet home.

NEO City, 2509.
After a series of operational bungles, as well as
the accidental death of his partner, special agent Blake Carter’s career at the Planetary Bureau of Investigation is in trouble.
To make matters worse, he’s just been assigned a new partner—and the beautiful and brilliant Nicki Steel happens to be a cyborg.
When universe-famous criminal Bartholomew Badde steals a weapon capable of destroying whole planets at a time, Blake and Nicki must work together to recover it—an investigation that takes them to all corners of the weird and wonderful galaxy.
But things get serious when Badde kidnaps Blake’s teenage daughter, Lisa. Can Blake prove he’s still a first-rate agent—not to mention father—and save Lisa in time?

Thank You Netgalley, Darrell Pitt and Text Publishing for allowing me a copy to read and review.

My Thoughts: So straight up the synopsis has offered up some high expectation for this book to meet and as an Adam’s fan I was like “Bring it on Pitt”. While I did grow to kinda like the lead character Blake Carter, he was in no way the adorable Arthur Dent – but that’s ok because he wasn’t supposed to be.

We follow Blake Carter a middle-aged agent with the Planetary Bureau of Investigation as he gets kicked off his current long running case, assigned a Cyborg as a new partner and having to deal with his ex-wife after their daughter is kidnapped. And of course, *spoiler alert* getting the bad guy – with a lot of help from the Cyborg, the ex-wife, some Elvis’s and an odd pirate-like space captain.

The “Zeeb Says” sections throughout the story while humorous at times and very ‘Hitchhikers’ in the style of narration, which I should have loved, I found a nuisance. I’d just be getting into the rhythm of the story and they’d distract me from it. Why was this so? I really don’t know! Did they feel like a poor Adam’s imitations? No that wasn’t it. Was it just because I was trying to hurry and finish the book because it wasn’t floating my boat and they were slowing me down? Yeah, I think that was more it.

I thought this book was going to be right up my ally; sci-fi with silly humour etc. But no, while I liked the book and can see its merits, unfortunately we didn’t click. I had to force myself to stay focused and read on. This book is listed as Middle Grade, so I’m not the target audience. But I can’t quite get my head around this book’s listing.

I’m trying to figure out who on earth would be the right audience for this book, because it is by no means a bad story. I think it’s a good story despite my personal enjoyment issues. If it was a Friday night telemovie I could totally see my father chuckling while watching it on the couch with a beer in his hand as he’s sprawled out with only his green and gold footy shorts on unwinding after another week of working hard in the Aussie heat.

I would say it’s definitely not for Teens, those self-absorbed self-torturing darlings wouldn’t give two hoots about this middle-aged law enforcement officer from the future. I’m thinking 8/12-year-olds who have a love of sci-fi for sci-fi sake and don’t care too much about who the hero is if there is lots of action and adventure – yeah, it’d suit them. MAYBE even a “daggy dad” type who wants to switch off his brain after a long day at work and read something that’s simple and amusing – I totally thought I fell into this category, but apparently not.

I do intend to check out Pitt’s The Firebird Mystery and Diary of a Teenage Superhero and see how I go with them, because I think Pitt’s a good writer, just that this book wasn’t for me. THREE ‘I Liked It’ STARS.