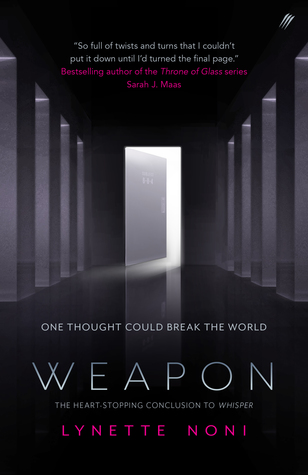 I already knew he was a psychopath. But now?
He’s more dangerous than ever.
And I have less than twenty-four hours to stop him.

After escaping Lengard and finding sanctuary with the Remnants, Alyssa Scott is desperate to save those she left behind ─ and the rest of the world ─ from the power-hungry scientist, Kendall Vanik. But secrets and lies block her at every turn, and soon Lyss is left questioning everything she has ever believed.

When long-lost memories begin to surface and the mysteries of her past continue to grow, Lyss battles to retain her hard-won control. Allies become enemies and enemies become allies, leaving her certain about only two things: when it comes to Speakers, nothing is ever as it seems… and the only person she can trust is herself.

I love Lynette Noni’s writing – That won’t come as a shock to any of you. I loved her Medoran Chronicles and I love this Whisper duology. If you’ve never dived headfirst into a world created by Ms Noni you are doing yourself a disservice.

Noni’s The Medoran Chronicles consists of six books set in a fantastical parallel world (the world building is epic) and are all about friendship and finding inner strength. The Whisper Series is also about friendship, learning how to trust others and yourself and discovering who you really are – well, who Subject 6-8-4 really is and what she’s made of.

Whisper and Weapon follow the story of Subject 6-8-4, let’s call her Chip for the purpose of this review. We learn about Chip’s past with her and her real name isn’t revealed into really the end of book one.

In Weapon we see Chip away from the secret facility that kept her locked up and tortured her for two and a half years. We see her discover the immense power she can wield. From the start of Whisper I immediately felt drawn to Chip and was rooting for her all the way to the end of Weapon.

Weapon kicks off right where Whisper finished. If you thought Whisper was edge of your seat intense, Weapon is more so. I tore through the pages, needing to discover what happened next! Needing to know what was going to become of Chip and her friends! At one point I was so stressed I almost skipped to the end just to make sure everything was going to end up okay (see I still haven’t forgiven Noni for Niyx in the Medoran Chronicles). But I didn’t sneak a peek and rode the intense roller coaster right to the magnificent end. Thankfully I didn’t lose any favourite characters in this series and I was satisfied with their hope filled endings.

Who would like The Whisper Series: People who love stories about secrets hiding right under their noises, conspiracies and mysterious government testing, side effects causing special abilities to develop in the test subjects children, hidden facilities, power corrupted leaders, and the strength of friendship. Any #LoveOzYa aficionados and Sci-Fi lovers of all ages.

You’ve done it again Lynette Noni, five out of five stars from me for the thrilling conclusion that is Weapon, I can’t wait to see what you write next!

Check out the hashtags #whisperseries #weapon and #speakup to follow along with Pantera Press’s blog tour for Weapon, taking place between November 1 and November 15.

One thought on “Weapon: #LoveOzYA Review”