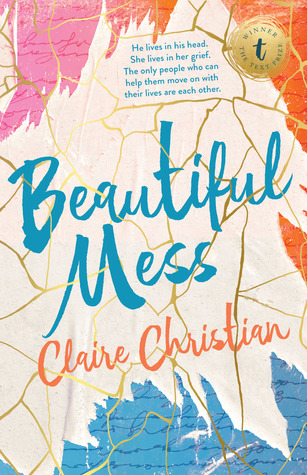 Since Ava lost Kelly, things haven’t been going so well. Even before she gets thrown out of school for shouting at the principal, there’s the simmering rage and all the weird destructive choices. The only thing going right for Ava is her job at Magic Kebab.

Which is where she meets Gideon. Skinny, shy, anxious Gideon. A mad poet and collector of vinyl records with an aversion to social media. He lives in his head. She lives in her grief. The only people who can help them move on with their lives are each other.

Enter the lovely Star who read and reviewed Beautiful Mess on my behalf.

Beautiful Mess is a messy book. It deals with heavy topics such as suicide, self-harm, and mental health. It is by no means a completely sad book, but it definitely has its sad parts.

One of the two main characters, Ava, has just recently lost her best friend, Kelly, to suicide. Life has been hard for her ever since. She’s angry, she’s sad, she’s hurting, and everyone around her keeps telling her that she’ll be able to ‘move on’ after time. But right now, it doesn’t feel like she’ll ever stop hurting.

The second main character, Gideon, is a poet, and also an anxious person by nature. He has a fair amount of anxiety, and depression, and has been on medication since he stopped self-harming at 13 years old. He still has his ups and down, as any person does, but he feels like he’s got a proper handle on things.

Ava and Gideon meet via Ava’s job at Magic Kebab, when Gideon is hired after his therapist helping him find a job.

The pair are unlikely – Gideon too nervous to talk to Ava, who told the entire school to “get fucked” during an assembly after Kelly’s death. And Ava has no idea who Gideon is, as they had never interacted before his first shift.

Ava finds Gideon interesting, and Gideon is fascinated with Ava. But because they have no way to chat outside of work as Gideon has a self-imposed no phone/internet thing going on, they start to write each other letters to get to know each other more.

As time goes on, their feelings develop into romantic, and sexual ones, and they become closer than ever.

But all of that aside, both of them know that they can’t “fix” each other, that there needs to be work on both of their parts if they’re ever going to be able to function properly as people in the wake of their overwhelming grief.

I liked that this book didn’t shy away from the heavier side of mental health issues. From Kelly’s suicide, and how she just needed to “end her pain” to Gideon’s self-harming and what led him to start.

These are the things that teenagers will think about, and hopefully, coupled with the resources in the back of the book, anyone who reads this book, can know that they are not alone, and they can seek help.

There were parts of the story I didn’t like, but that was a me thing, and there were parts that hit really close to home for me, but I do think that anyone who has any mental health issues, or who knows of anyone who does, will probably find this book helpful in knowing that they’re not alone.

And I think the most important take from this book is that you can’t just fix someone else’s issues and problems. It has to be something they want to do, but it also has to be done with professional help and support.