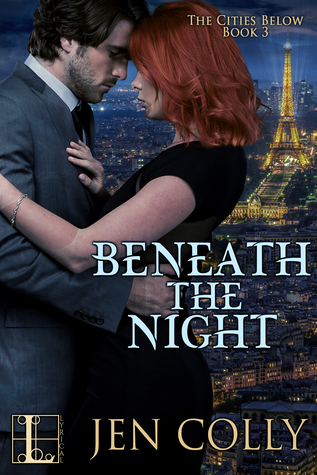 Lord Navarre Casteel wakes from a long sleep to find the vampire city he rules forever changed and his future in the hands of a mysterious beauty who offers her life for his. Fiery-haired Cat survives his feeding, fueling Navarre’s body and mind—as well as his suspicion that she is one of the Forbidden—a lethal mix of vampire and human blood. Yet that doesn’t stop the throb of Navarre’s desire, the feeling that she is destined to be his mate, to hell with consequences. . . .

A solitary fighter sworn to protect the children in her charge, Cat never expects to feel so much for Navarre in the face of his savage feeding. Which is why his offer of protection is nearly her undoing. For how can she let down her guard when she has always walked alone? But Cat has never faced an enemy like the one she faces now, never felt such a powerful need to surrender to the force of love . .

Beneath the Night is the third book in the The Cities Below series and each book focus on different vampires and as such can be read as a standalone. I don’t feel that my enjoyment was hindered by not reading the earlier books.

I found Beneath the Night to be quite clean for a vampire romance. A lot of adult vampire romances lean towards smut. Now I’m not bagging out vampire smut, I’ve read and loved a fair bit of it in my time, but I don’t want to be reading it all the time – it was a nice surprise that I found refreshing.

The vampires – Extremely civilized and human feeling. They sleep during the day and are still burnt by sunlight, so normal vampy stuff there, but eat regular food as well as drinking blood. They can survive without blood, but they age without it. Most of them live in underground cities, the one that this book is set in being called Balinese.

Multiple POV’s – We meet POV Savard first, then Cat, Then Navarre. The swapping between was well placed and smooth, never impacting on the flow of the overall story line.

I found myself drawn to the dark, mysterious and pining Savard. At first I thought Savard was pining for his friend, the fallen Lord Navarre, ruler of Balinese. Later it became more apparent that while he carried deeply for his Lord, he was pining for the freedom he’d lost in having to temporarily take over for Navarre and run Balinese.

I liked Cat from the moment we met her. She is a ballsy, fierce and loyal Mumma/vampire vixen. She’s lives with PTSD from a childhood she keeps hidden and is very standoff-ish towards everybody who isn’t one of her five adopted children, Savard or her guard duty partner Dyre.

I found myself shipping Cat with Savard before we met Navarre, which is one of the reasons I think I found it hard to connect to Navarre or get into the romance between He and Cat. There wasn’t any dislike, I just didn’t connect to him as much as I did the other two POV’s. He was asleep for the start of the book, recovering from a demon attack, while we were getting to know Cat and Savard and I think that probably contributed to the lack of connection also.

The Plot – As well as the fated mates romance story-line, there is a who’s the bad guy story-line (which is full of run ins with demons, battles to the death and for me it’s what propelled the story along).

All in all, I found Beneath the Night to be a quick and entertaining read.

Note: I first received this book for review back in early 2017. At the time I couldn’t get into it and put it aside. In October I got around to trying again. From time to time I find I can’t get into a book and experience has shown me that nine times out of ten it’s me and whatever I’ve got going on in my life that is the problem, not the book AND that definitely was the case with this book. I’m glad I tried again (although a lot later than I’d originally planned) because I did enjoy Beneath the Night.

You can find more about Jen and her books on her website HERE and her Twitter HERE.

2 thoughts on “Beneath the Night: Review”