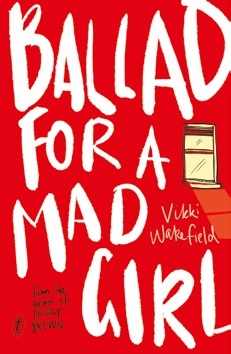 Everyone knows seventeen-year-old Grace Foley is a bit mad. She’s a prankster and a risk-taker, and she’s not afraid of anything—except losing. As part of the long-running feud between two local schools in Swanston, Grace accepts a challenge to walk the pipe.

That night she experiences something she can’t explain. The funny girl isn’t laughing anymore. She’s haunted by voices and visions—but nobody believes a girl who cries wolf.

As she’s drawn deeper into a twenty-year-old mystery surrounding missing girl Hannah Holt, the thin veil between this world and the next begins to slip. She can no longer tell what’s real or imagined—all she knows is the ghosts of Swanston, including that of her own mother, are restless. It seems one of them has granted her an extraordinary gift at a terrible price.

Everything about her is changing—her body, her thoughts, even her actions seem to belong to a stranger. Grace is losing herself, and her friends don’t understand. Is she moving closer to the truth? Or is she heading for madness?

Damn, what can I say to get you to read this book without giving it all way. – The only thing that disappoints me about this book is that I’ll never be able to read it again for the first time!

I felt a connection to the protagonist, Grace almost immediately. You only make it to the third page before she tells you of her mother’s death. Grace’s hides her grief and dark inner thoughts from everyone around her, behind the shield of being her school’s resident joker and daredevil.

An incident late one night, during one of her daredevil stunts, leaves Grace questioning her sanity. Grace struggles keep a grip on her normal day to day life resulting in her relationships with her friends and family becoming strained, this then pushes her to keep dangerous secrets and go off on her own. Grace is compelled, seemly to her by an outside force, to Investigate a twenty-year-old mystery. The disappearance of a local girl named Hannah. Investigating Hannah’s disappearance leads her to discover secrets about two other local’s deaths, one being her own mothers.

This is a brilliant bloody book. The tale Grace has to tell is deliciously dark and spine tingling. The story’s pace and flow are fantastic. A thrilling murder mystery with some seriously creepy scenes. The story explores grief, belief in the paranormal, family, friendship, mental illness and criminal redemption. 5/5 a #LoveOzYA must read.

4 thoughts on “Ballad for a Mad Girl: #LoveOzYA Review”