The last day has come and gone, but the saga continues in Once Human as Massimo Marino continues to explore the future of humanity. When you’re surrounded by peace and plenty, think of a malignant power lurking from the depth of the earth.

The rebirth of the race of man is closely watched, and the Selected, the transgenic humans created by the Moîrai, guide and care for the wellbeing of the remaining humans intheir various Communities around the planet.

Peace and security are shattered with acts of sabotage disrupting the fragile equilibrium of the growing society.

Lust for power has yet to be eliminated, and peace is more fragile than it seems when betrayal, fear, and conspiracy send the planet to the brink of self-destruction. Death and blind violence walk in the depths of the planet, from the coldest lands to the bottom of the oceans. Ancient aliens, a galactic struggle, the control of a unique resource, meld to dictate the fate of humankind. 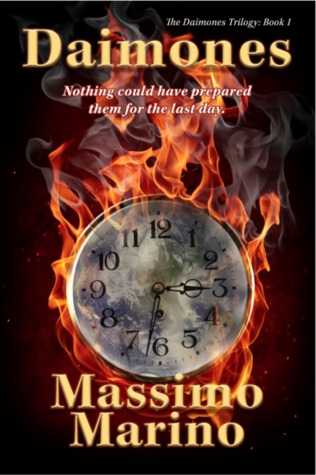 Your entry into an exciting Space Opera: the death and re-birth of the human race.

Nothing could have prepared them for the last day. Explore the future of humanity in Massimo Marino’s sci-fi debut, Daimones, an apocalyptic tale that feels like it could happen tomorrow. You may never sleep through a windstorm again.

Death swept away the lives of billions, but spared Dan Amenta and his family, leading them to an uncertain future. When merely surviving isn’t enough and the hunt for answers begins, memories from the past and troubling encounters lead Dan to the truth about the extermination of the human race. Distressing revelations will give new meaning to their very existence.

Early humans shaped the future and seeded a plan millions of years in the making. Now survivors must choose: Endure a future with no past or fade away into a past with no future?