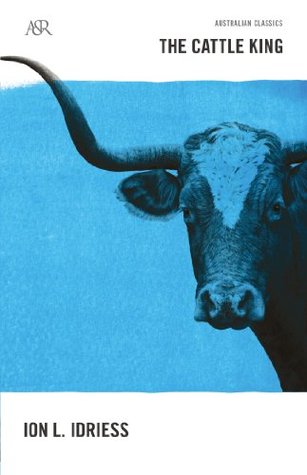 At the age of 13 Sidney Kidman ran away from home with only five shillings in his pocket. He went on to become a horse dealer, drover, cattle buyer and bush jockey and he also ran a coach business. Above all, Kidman created a mighty cattle empire of more than a hundred stations, fighting droughts, bushfires, floods and plagues of vermin to do so. His enterprise and courage won him a huge fortune and made him a legend.

I purchased this paperback on the 4th July at the Australian Stockman’s Hall of Fame at Longreach.

When we entered the museum we watched a documentary and Sir Sid Kidman was mentioned. I thought “wow he sounds like an interesting fella”. So when we got to the gift/sourvenieer shop and there was a book about him, I just had to buy it.

Once we got back to our camp that afternoon I immediately started reading it. The first few pages gives us a brief history of Angus and Robertson, then a brief history on the author, followed by the author’s note. I was buzzing by this point as I’d already found these first pages fascinating and I hadn’t even started to really read about Sir. Sid Kidman yet.

Kidman’s life was truly amazing. I read this while we were travelling through some of the places mentioned in the book, so that added an extra special kick to my experience. The Silver City aka Broken Hill was mentioned quite a lot and it gave me the extreme urge to go there, but alas it didn’t work out with the rest of our camping trip.

Some times when I read a YA dystopian or fantasy novel I get a bit “Oh yeah right, as if a 16 year old could do that”. But the thought struck me while reading this book, that if thirteen year old Kidman could do the things he did, than they probably aren’t that far-fetched. Go back 100 years or more and you were a child, than an adult – None of this teenager crap. You had a job at thirteen and where out working with the men. At Thirteen Sid had saved up a years’ worth of earrings and ran away from home.

Sid, a thirteen year old, in unfamiliar bush saved himself and a fellow drover from dehydration and starvation. He had a kind heart and a brilliant mind. The man was a genius. His brain was a sponge. He traveled all over the place listening to and learning from anyone who would talk to him, from anyone who would show him. At a time when Whiteman feared and hared the Blackman, Sid was leaning all they were willing to teach him about the land. Thirteen year old Sid was able to do things that a thirteen year old today couldn’t even contemplate.

So yes, Kidman’s life was fascinating. The book was a bit dry at times, a bit like a high school history textbook and I felt like I was going to choke on all the statistics. But still Kidman shined.

Kidman grew to own more Australian land then the British Empire at one point. He was growing his empire while the Kelly boys were raising hell. He put an enormous amount of his own resources into Australia’s WW2 efforts. The man was a true blue Australian legend and sadly one I don’t remember ever hearing about in school. I think his story is inspiring – Someone today’s little spoilt teenagers should aspire to be like.

During his life time Idriess wrote a large number of Aussie themed books and I intend to somehow get my hands on a few of them.