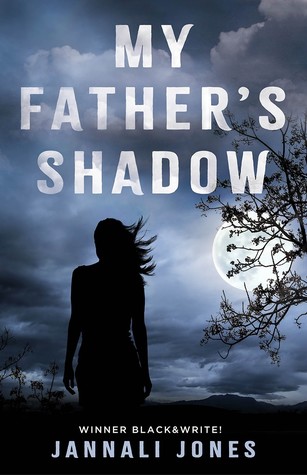 Kaya is completing her Higher School Certificate when she is woken in the middle of the night by her mother. They are to pack immediately and go to their holiday home in the Blue Mountains. Her father is ‘not coming back’. He has been involved in a court case to give evidence against some dangerous criminals.

Months later, they are still in hiding and the mysteries are multiplying. Kaya is not sure who to trust: her mother’s new friend, the policeman or her new friend, Eric, from the local store. She is also recovering from memory loss caused by PTSD after a chilling encounter with the criminals. She is seeing a psychologist in an attempt to recall the evidence she might have to give in a forthcoming trial.

Her best friend, Jemma, has gone overseas and Kaya is trying to make sense of what is really happening. Jannali Jones has crafted a thrilling story which stays on the edge right to the end.

My Father’s Shadow is the kind of book you just can’t put down – it was so hard to rip myself a way from. The constant uneasy vibe that Jannali Jones has created with her magnificent writing propels you forward and keeps you right on the edge of your seat.

An intense prologue kicks the book off showing us the night that POV Kaya and her mother go into hiding. This is a fast pace book that doesn’t let up for the whole 217 pages, but never feels rushed. I commend Ms Jones for fitting so much story into so few pages.

Kaya suffers from memory loss caused by PTSD after an encounter with the criminals her father was trying to gather evidence on. Throughout the book she slowly gets her memories back, which we witness through flash backs, it’s a brilliant mechanism for ramping up the unease and tension – As are the two particular characters that you spend most of the book wondering; are they goodies or baddies.

The budding friendship with Eric was a lovely bit of light in the darkness that had become Kaya life and provides some balance in the story.

I would have loved an epilogue showing Kaya safe and happy, seeing what becomes of Eric and with the “bad guys” being brought to justice – but the ending does hint at this, so I’ll just happily daydream about it.

I don’t want to say too much and risk spoiling the story for others, so I will just say that – My Father’s Shadow is an outstanding #ownvoices #loveozya debut. It is nail bitingly, edge of your seat brilliant!! A must read for all #loveozya aficionados and crime/mystery/thriller buffs.