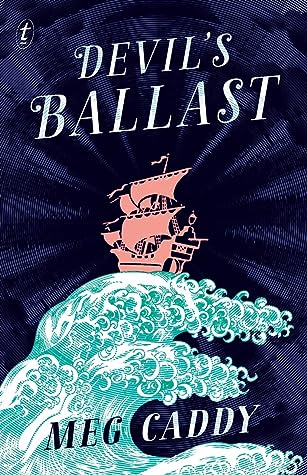 ANNE Bonny was eighteen when she ran away from her
violent husband, James, into the arms of pirate captain
Calico Jack Rackham. Now she’s ensconced aboard Jack’s
ship Ranger, passing as a cabin boy, and playing her
ruthless part in a crew that is raining down mayhem and
murder on the ships of the Caribbean.

But James Bonny is willing to pay to get his ‘property’
back. And pirate-hunter Captain Barnet is happy to take
his money.

The Ranger’s a fast ship: Anne might just be able
to outrun Barnet. But can she outrun the consequences
of her relationship with Calico Jack?

Action-packed yet nuanced, culturally relevant and
sharp as a cutlass, this new novel by the remarkable
Meg Caddy brings to life one of history’s most fascinating
anti-heroines.

I was over the moon when this book landed in my PO Box and I was itching to get into it immediately. But alas life got in the way and it took me longer to get to her read than I would have liked.

Devil’s Ballast by Meg Caddy is a fictionalised historical YA tale based on the life of female pirate Anne Bonny, that came out on the 7th of may. The story opens with:
“I counted fifteen dead men working the deck of the Kingston.
Well, they weren’t dead yet, but the day was young and I had a full belt of shot.”
Of yeah, that got me excited for a rip roaring story of pirate-y murder and mayhem.

The book is set at the start of Bonny’s pirating career, when she first runs off to sea and subsequently meets Read (Mary Read, another notoriously famous female pirate from yesteryear). The friendship between Bonny and Read was the shining highlight of the book for me and I would love to read a sequel that follows the two creating pirate-y mayhem together.

Anne Bonny is somewhat considered a historical bisexual figure, so I was a little disappointment when her only sexual love interested was a man. I got over it when a friendship started to develop between Bonny and Read. I felt it was their confiding in each other and the mutual respect and friendship that grew, to be what really picked up the pace of the story and had me racing through the pages until the end.

There is no way to historically prove that Bonny was bisexual, where as her relationship with Calico Jack is documented – so you can’t blame Caddy for using him as her love interest – but personally I would like to have seen those bisexual rumours/suspicions explored, even if only a little.

Both in real life and in this book Anne Bonny and Mary Read partook in cross-dressing: Bonny to hide the fact she was a woman and Read to hide the body he’d been born with. With Read being transgender and the kinship between him and Bonny, ultimately I feel like I did get a queer fix with this book. So yay for that.

I think the authors note at the end of the book sums it up. “…it should be noted that almost every account of her life, including this one, is filled with sensationalism, mysteries, inconsistencies, rumour and outright lies. I think she’d like it that way.” I think both Bonny and Read would like it that way 🙂

“Nothing like a stiff drink after a good murder”, Read murmured.
“Just so.” Darling pulled up a chair. “What are we going to do with the bodies?”
“Harbour after dark.”
“A time-honoured tradition,” he agreed.

Conclusion: If you are a lover of pirate filled tales and strong leading female characters, then this is the book for you. If you were hoping to see a bisexual icon taring up the seas taking up a variation of lovers along the way, then this won’t hit the spot. But it’s still a damn good read that I enjoyed. I’m crossing my fingers for a sequel – so I think that in it’s self says enough.