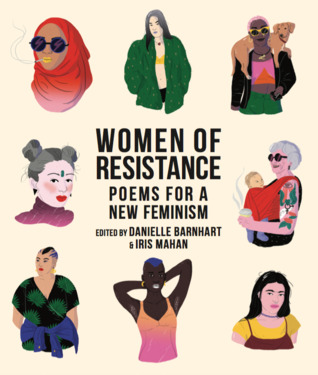 A collection with a feminist ethos that cuts across race, gender identity, and sexuality.

Creative activists have reacted to the 2016 Presidential election in myriad ways. Editors Danielle Barnhart and Iris Mahan have drawn on their profound knowledge of the poetry scene to put together an extraordinary list of poets taking a feminist stance against the new authority. What began as an informal collaboration of like-minded poets—to be released as a handbound chapbook—has grown into something far more substantial and ambitious: a fully fledged anthology of women’s resistance, with a portion of proceeds supporting Planned Parenthood and the Center for Reproductive Rights.

“This anthology does not have a singular purpose. It is part love letter, part manifesto, part confession, part wish and those are just the raw materials.

It is also a meditation on grief. We grieve for the woman we have lost, the violence and oppression we endure, and the children who will never make it to the terrifying and glorious world of womanhood.” –Taken from the introduction by Danielle Barnhart.

I originally received a e-arc for this poetry collection from Netgalley, but I struggled so much with the formatting on my kindle app that I couldn’t get into the poems. I couldn’t find the rhythm. So I decided to stop trying, as I was beyond frustrated. I decided to wait until the book was released and buy a paperback edition and then try that. What I ended up doing was buying an audiobook version – much better. Hearing the poems read out loud, being able to hear and feel the rhythm, muuuuuuch better!

This collection made me ache. So much anger and pain held in their words. So many wrongs against women told with their words. Some of the poems saddened me deeply. Some I found truly profound. Some spoke to my soul. And some made me want to set the world on fire.

If you are after a beautifully flowing lyrical rhythmic masterpiece – then this isn’t for you.

NOTE: This anthology is trigger central. It touches on everything that is Woman. Everything that is life for a woman. The beauty and the danger and the rotten core of it all. Touching on everything from physical abuse, sexual assault, racism, sexism, abortion, marriage, motherhood and menstruation.

4 thoughts on “Women of Resistance”