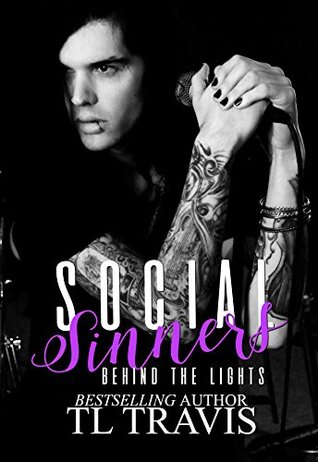 Joey Hayes and his best friend Ricky Branson have been together through the good times, as well as the bad. Attending their first concert as teens set the path for their futures in motion. Shortly after, the pair joined band class where they meet Ethan and Mick and the foursome formed the metal band, Social Sinners.

Things were going according to plan until Lucas Shane entered their lives, disrupting the flow and testing the strength of their friendship.

When Joey spirals down a dark path after catching his cheating boyfriend, this tasked the other three band members with making a difficult decision that could end his career as their lead singer.

Joey, Stoli, Mickey and Diamond; four mates who formed a heavy metal band in junior high (Social Sinners), who stuck together and ended up making it big.

Behind The Lights is the first in a five-book gay-erotic-romance series and it is told from the POV of Joey. For the most part it didn’t feel like I was reading erotica – It felt like I was reading a LGBT contemporary romance novel.

This book, as far as I am conceded is an example of erotica done right. Yes, obviously there were graphic male on male sex scenes, but there was so much more to it. It had a well-paced and enjoyable story. And it had easily likeable characters that by the end I had become emotionally invested in.

There are no over the top Rockstar drugged up antics or drug abuse from the Social Sinners – I’m not saying the boys don’t get up to any mischief, because they do, but it’s not over the top and drug use isn’t glorified in anyway.

The book starts where it ends, with Joey standing on the stage kicking off a Social Sinners show, a big one, back in the place where it all began. In-between we take a trip down memory lane with Joey, learning how Social Sinners came to be and watching Joey grow from child to man, discovering himself, his sexually and true passions along the way. This book has lots of build-up and back story – letting you get to know the boys.

If you’re curious to give Social Sinners a go, but the five books bit puts you off, I will say that I think the ending was satisfying enough for it to be a standalone. So, go forth without fear of cliffhanger endings.

And FYI book #2 In The Shadows, releases on the 8th August and is told from Stoli’s POV. So, when you find you really want more from the boys, you won’t have to wait long to get it.

2 thoughts on “Behind the Lights: Adult Review”