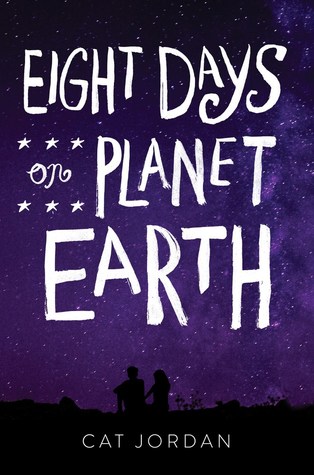 To the universe, eight days is a mere blip—but to Matty Jones, it may be just enough time to change his life.

On the hot summer day Matty’s dad leaves for good, a strange girl suddenly appears in the empty field next to the Jones farm—the very field in rural Pennsylvania where a spaceship supposedly landed fifty years ago. She is uniquely beautiful, sweet, and smart, and she tells Matty she’s waiting for her spaceship to return to pick her up.

Of course she is.

Matty has heard all the impossible UFO stories for all of his seventeen years: the conspiracy theories, the wild rumors, the crazy belief in life beyond the stars. As a kid, he searched the skies with his dad and studied the constellations. But all that is behind him now. Dad’s gone and Matty’s stuck.

But now there is Priya. The self-proclaimed alien girl. She must be crazy or high, right?

As Matty unravels the mystery of Priya, he realizes there is far more to her than he first imagined.
And if he can learn to believe in what he can’t see: the universe, aliens…love…then maybe the impossible is possible, after all.

A heart-wrenching romance full of twists that are sure to bring tears to readers’ eyes, from Cat Jordan, author of The Leaving Season.

The story is set over the course of eight days, but you probably guessed that from the title. It focuses around 17-year-old Matty, with the back drop his small rural home town. At the start of the story Matty’s dad runs off, leaving Matty and his mum to pick up the pieces.

Matty feels lost and unsatisfied with his life. We see him drag his feet all through day one, perking up when he spots a strange girl in the field next to his house late that night. The same field that a space ship supposedly crashed in back in the 60’s.

The girl says she’s an alien. Matty thinks she’s nuts, but humours her, worried about her welfare. Matty feels an intense connection to her early on. And takes it upon himself to keep an eye on her, as she is determined to stay in the field all night by herself, waiting for a spaceship to pick her up.

It is summer holidays and with nothing much to do Matty keeps finding himself drawn back to the field and the strange girl. They spend the next five days together hanging out in the field and around town, the whole while Matty is trying to figure out what the strange girl’s deal really is, where she really comes from and why she was really camping out in the field next to his house – this takes up most of the book.

Matty notices that the girl’s health is deteriorating and presses her to tell him the truth about who she is, she of course does a runner. AND I can’t say much more without giving everything away. I will just say that “somehow” Matty manages to track her down and that the book’s ending is both heart-warming and heart-breaking.

At first, I was torn as to whether the girl (Priya) was an alien or not. I want to believe. I always want to believe. At one point I almost expected a spaceship to come and pick Priya up. I even went and checked if the book was actually listed as YA contemporary and not YA sci-fi. Either way, alien or not, I enjoyed the story. The writing was easy to read, and the story followed well. The chapter headings were split into days and times which helped propelled the story and add tension. All in all, it was a Quick and enjoyable read.

Thank you for the review copy, Cat and YA Bound Book Tours.