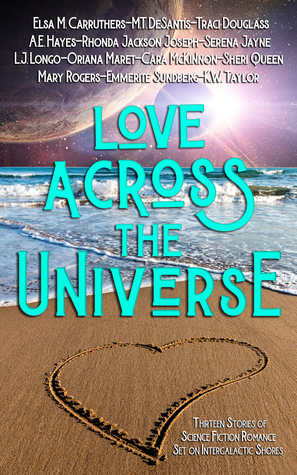 Source: Review copy from Bewitching Book Tours – this has in no way influenced my review- THANK YOU.

Love Across the Universe is a science fiction romance anthology consisting of twelve short stories of varying lengths and with leading characters of varying human status and sexual orientation. A few of the stories fell victim to the instantaneous trap, but the majority managed to build up quite enjoyable story lines.

Sexy time warning: Not all, but most of the stories contained sex scenes. None were super graphic. Just thought I’d give you a heads up 😛

The Princess of sands by M.T.Desantis. This story was a super cute and adorable, as were the characters. It featured a stowaway and an arranged royal marriage. The writing and story flowed well and I would happily read a longer version where the drama and romance are teased out more. Romance: female/male.

Reprogramming by K.W. Taylor. I wanted this story to keep going! Essentially this was the story of someone trying to kill their partner to get their families money. I really enjoyed it and want a revenge sequel ASAP. Romance: female/android.

Breathless by L.J. Longo. This was a well rounded out story involving the unlikely duo of an Ex-soldier and a resort manager. The story was action packed with alien bug slaying and blooming new romance. I know that sounds like it wouldn’t work – but it totally did. Romance: male/male.

Fluid by Emmerite Sundberg. The writing and story flowed well. It featured a human shipwrecked on an uncharted planet who finds unexpected romance with a native humanoid water being. Romance: female/female.

A Dream to Build a Kiss On by Traci Douglass. The longest of all the stories in the anthology. An island paradise of extremely rare tropical plants brings together a lonely nature loving android who has the capability of thinking and feeling for itself, with a lonely and broken-hearted botanist. Both find something to desire on the island other than the plants. Romance: female/android.

As a whole I give the anthology 4/5. Overall is was a fast and fun read.

4 thoughts on “Love Across the Universe: Review”