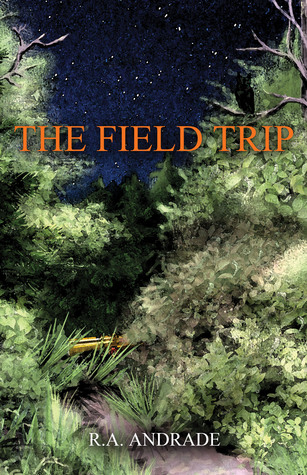 The Field Trip by R.A. Andrade

Thank you to the Author, Publisher and Net Galley for giving me the opportunity to read and review this book.

An adventure mixed with a touch of fantasy. Add a twist of love.

Although clumsy with women, botany professor Ross Barton possesses the quality of fearlessness when confronting danger. Relieved to be escaping routine school work and a bad relationship for a field research trip, a strange woman and danger are the last of his expectations.

Jay, an awkward young woman unwilling to disclose her past, begins a solitary hike into the forest with a pet concealed in a box. She claims the pet is a cat.

Rumors are spreading about odd lights in the night skies of New England.

A flight instructor reports that the government quarantined an area of Vermont woods.

All trails intersect on The Field Trip.

I’ve struggled writing this review, while there were some good qualities in this book; I just didn’t connect with it.

Ross: Professor of Botany Ross Barton is 35, terrified of woman and single. He is sweet, naive, gullible and later on in the story bizarrely develops into an action hero.

The story starts off alternating between following Ross and a group of unnamed men in white lab coats at an unnamed facility. Ross is easily likable and the mysterious white coats are interesting, driving the story forward.

We meet Jay via a run-in Ross has with her while getting supplies for his trip. It’s not long after Ross starts his trip that the two story lines meet up and we are just following Ross through.

Jay: I guessed Jay Jay and Oswald’s secret earlier on and at first I really liked Jay’s character, she was aloof, aggressive and mysteries. The emotional turn around she does just felt too fast and rushed. I would have liked to see Ross and Jay’s relationship build more before blooming.

Oswald: Funny, twisted, sarcastic, but far too intelligent to be believable as a pet on any planet.

I could never tell where the story was going and that unpredictability was at times frustrating, but also one of the books better qualities, as more often than not you can guess what’s going to happen in a story.

The ending was a little hard to swallow. I liked that Jay was back. I was over the moon that Oswald was back. But no one asked Marsha what she wanted – It felt like body snatching and didn’t sit well with me.

I feel bad giving it only Two (It was ok) Stars, but I can’t bring myself to give it Three (I Liked It) Stars. I would be willing to read more work by R.A. Andrade, as the story wasn’t bad, it just wasn’t for me.

Ron writes from a small community in Michigan, sometimes at three in the morning when ideas wake him from sleep. He was born and raised in New England, sometimes drawing on those childhood and teen experiences for his novels. Driven to write, his goal is simply to entertain by bringing you the unexpected.