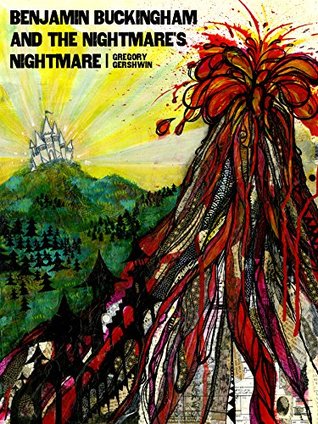 Benjamin Buckingham and The Nightmare’s Nightmare by Gregory Gershwin

I received a copy of this book from the Author in return for an honest review – so thank you Mr. Gershwin

WARNING: Do not read if you hate talking dinosaurs.

DOUBLE WARNING: This book contains adventure and castles and nightmares and faraway lands.

TRIPLE WARNING: Do not read this book while riding roller coasters.

What happens when you wake after a night of dreaming to find your favorite dinosaur character from your favorite TV show talking to you in your bedroom? You and the dinosaur panic!!! After nine year-old Benjamin Buckingham calms down, he chooses between chasing after the dinosaur into a secret world or… going to school. What Benjamin finds is an imaginative world with castles filled with people who create dreams. But, Benjamin discovers something else, something awful, something treacherous. An evil castle creates nightmares and the ruler of this castle wants to destroy all the dreams. Benjamin begins a quest to save a kidnapped king and finds talking animals, magical castles, and frightening monsters along the way. Will dreams survive? Will nightmares be destroyed? Will dinosaurs continue talking forever?

Nine year old Benjamin Buckingham from Pennsylvania doesn’t fit in with the other kids at school. His only friends are the action hero talking Dinosaurs he dreams of at night. So it’s no surprise when he awakes one morning to find one of his dream Dinosaurs in his bedroom that he follows it into an unknown new world.

Benjamin finds sympathy and friendship in the form of the dream worlds King. The trouble starts when the King tries to return Benjamin to his world and they miss the portal (thanks to bad guy interference of course). Things only get worse for Benjamin as the King is kidnapped and he finds himself banished from the castle. Being that the king is the only one who can send Benjamin home, he does the only thing he can do – set off to save the king.

In this story we see Benjamin transform into a confident, happy boy, who learns his self-worth and makes friends along the way (be it with a talking caterpillar and a squirrel that runs with its eyes shut).

The story has a kind of Alice in Wonderland, Wizard of OZ, Never-ending Story vibe – It entertains you and makes you feel warm and fuzzy inside. There are plenty twists and turns in the story to keep even the adults riveted. Not to mention there are some really good character speeches, imparting some important life lessons. This story has everything; action, adventure, bad guys, good guys, dinosaurs, dream studios, classes about creating dreams for grumpy old men, and a nine year conquering his fears and saving the day with his creative imagination – what more could you want.

I enjoyed this as an adult and I could really see a child eating it up, loving Benjamin and the dream world Mr Gershwin has created.