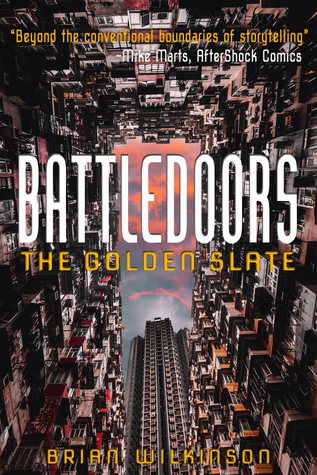 Life constantly seems to be wavering between really good and really bad for Owen, a lonely sixteen-year-old still reeling from the unexpected death of his mother and a fresh move to Toronto. After ducking into an old bookstore to escape high school bullies, Owen discovers that he can travel to a parallel, twisted version of the city with a magical tablet called a Battledoor, where he encounters new allies, bizarre creatures, and the ultimate antagonist who will stop at nothing to procure the magical Golden Slate for himself.

Forced to work together with friends and enemies in order to return home, Owen is faced with a series of choices that will prompt him to find courage he never knew he had, explore the possibility of romance, and try to find a way to let go of his painful past and move on. But is Owen ready to finally take control, and become the protagonist of his own story?

I first started reading this book in January 2018 when I received an eARC to read and review. I gave up reading it the first time around because I couldn’t stand the character of James. I really liked the sound of the book and the main character Owen was a sweetheart, so rather than just DNF the book, I put it back on my TBR to try again at a later time – In my head, I was thinking later in the year (2018). Oops, here we are over two years later. BUT It was worth the wait as I ended up enjoying the book enough to be tempted to purchase the second book to see how things turn out for Owen and his friends.

When we first meet 16-year-old Owen he is emotionally exhausted and lonely, fed up with the hustle and bustle of his new city and the bullying at his new school. Owen spends most of his days trying to blend in and be invisible, while morning the loss of his mother. More characters join the story quite early on, with love interest Emily and her friend Bea, and bullies James and Lucas. After only a few chapters the teens are all thrown into the chaos of another world together. Que giants wanting to boil them in brews, evil fairies wanting to eat their skins and helpful strangers who appear to straight out of the eighteen-hundreds.

This book gives off major Never-Ending Story and Jumanji vibes and that part I loved. For the most part, it read as an MG adventure book, but then there were moments (mainly surrounding James) that were darker and sat more in YA territory.
I will say that the character of James is a psychopath that needs medical intervention and I found that the moments focusing on him detracted from my enjoyment. I think the author was trying for a Draco Malfoy moment, but the thing with Malfoy is that he’s not truly evil. James just came off as a serial killer in the making.

Battledoors #1, The Golden Slate, for the most part is world-building and getting to know the characters, which I did find enjoyable to read. We don’t meet the antagonist, the big bad guy, until later in the story – Then the story ends on a cliffhanger. And you need to go out and grab Battledoors #2, The Black Spyre, just to see what the outcome is. Argh, Cliffhangers!!
I think this book is best suited to younger YA readers who are into adventure stories but be prepared that they might be requesting the second book immediately after finishing the first.