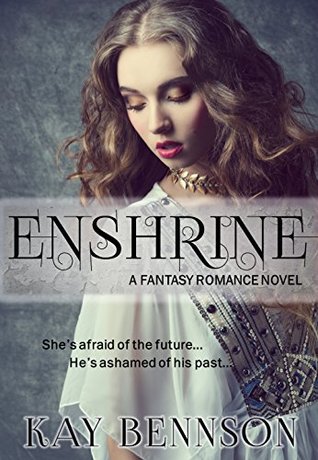 When Sage Wolfe is accidentally mistaken for a peace offering, her world turns upside down. Dayton, the young, handsome, and insane King of Rosementh whisks her away to his castle to be his bride with the promise that he can give her the world and anything she desires. These offers becoming tainted as Dayton’s true colors show themselves; he is cruel and violent and Sage vows to run away or die trying.

Just when Sage thinks she is hitting rock bottom, a hooded stranger named Jonathan Kreider comes to the castle. He doesn’t say much but his actions speak for themselves. Not only can he wield a sword or shoot an arrow better than most of Dayton’s men, but he always seems to be a step behind Sage, and though it should terrify her, for the first time Sage finds herself filling with hope.

Sage is faced with a choice. Should she run away from the wicked king who took her away from her family? Or should she stay to learn more about the man who lurks in the shadows, the man that makes her heart race and almost makes suffering Dayton’s wrath worthwhile? Sage is about to discover that nothing is as it seems and everyone has secrets; Dayton, the man that calls himself Jonathan Kreider, and even herself.

I love it when a book pleasantly surprises me. I signed up to read Enshrine when I saw it in YA Bound’s review call out email late last year. At the time I was in a bit of a mood and thought, I could go for a good old basic love triangle fantasy. That’s not what this ended up being, but back to that a little later. I received the ecopy and then realised it was a 2017 release. It didn’t fill me with hope that the author was still trying to build up reviews a few years down the track. In the end I went into reading this one a little apprehensive, but ended up really enjoying it!! Love it when a book not only beats my expectations, but blows them out of the water.

Firstly, there is no love triangle. Secondly, this book got me hooked and so much more invested in Sage’s life then I expected AND that epilogue! If Kay ever writes a sequel, i’ll be reading it. Thirdly, Sage’s true love interest. Not the piece of crap boy king, but the sexy man muffin warrior that was Jonty (Jonathan). Jonty was a good dude. Okay a little messed up thanks to his daddy and mummy, but a good dude, and fortunately an excellent fighter. He always treated Sage like she was his equal and taught her how to fight and survive on the run. In the end they both ended up saving each other a few times over and fell in love and lived happily ever after.

Now to the piece of crap boy king Dayton, that tried as hard as he could, and almost succeeded in ruining that happily ever after. Dayton was a Ramsay/Joffrey type, so umm… trigger warnings for domestic violence. Thankfully you never saw the darker stuff, it was just hinted at.

All in all this was an extremely enjoyable YA fantasy romance romp. Our heroine goes from being the lowly poor eldest daughter of a war widow, who’s prospects for the future are low and sad in the little village she calls home – to a well traveled sassy ass kicking adventure seeking young woman. And she picks up some arm candy along the way. Way to go Sage!!

One thought on “Enshrine: YA Review”