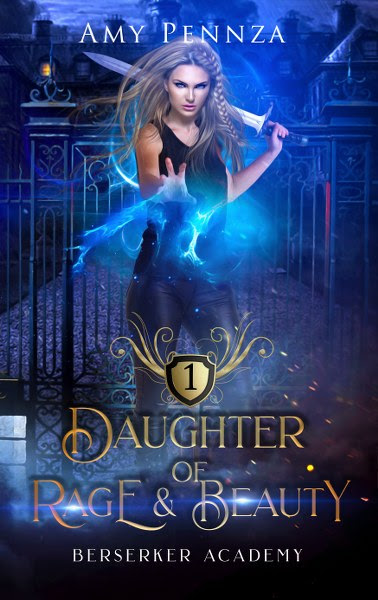 The sagas claim you can’t fight fate. I’m determined to prove them wrong. They say your twenties are supposed to be the best years of your life.
Clearly, they don’t know what they’re talking about.
Because right now, my life is in shambles. As the daughter of one of the most powerful berserkers in the world, I should be taking my place among the noble guild of berserker assassins. By now, I should have mastered my emotions and conquered my rage—all the better to use it as a weapon when called upon to kill.
But I’m not just Harald Berregaard’s daughter. My mother was a nymph, which makes me a magical mutt. When I was born, my father thought I might possess the best traits from both races.
He was wrong.
Now he’s shipping me off to the Berserker Academy, where the unofficial motto is “graduate or die.”
Nice, huh?
With the stakes this high, I can’t afford to get distracted. Too bad the academy’s headmaster keeps showing up at the most inconvenient moments, reminding me how much I suck at magic. And fighting. And basic conversation.
It doesn’t matter that he does it with a smile. Or that his eyes fire silver when he’s amused . . . or aroused. Hauk Sigridsson has his own problems. He’s not going to be one of mine.
On the other hand, he’s offered me a way to accelerate my studies and make it out of the academy alive. I just have to help him steal a priceless rock and defeat one of the most powerful immortals to have ever lived.
No big deal.
I’m in way over my head, but I’m determined to survive. They say you can’t fight fate. I’m going to show fate exactly what I’m made of.

The story opens with Elin approaching BjØrneskalle Castle, home to the Berserker Academy (think of it as an assassin’s university), in a car with her father. The tension in the story builds as they get nearer and nearer – A fantastic hook in! It had me. I needed to find out what was going to happen and what this Berserker Academy was all about.

Elin is our POV character: She comes across as sweet, yet powerful and was easily likeable. Elin mother was a nymph, so she’s half Fae – She soon finds that this is disliked by some of the other students. For the first half of this book I felt Elin was younger than her 21 years. She had lived a life away from most of the berserkers, being home schooled up until the start of the book. Elin had spent her whole life being put down by her unsupportive hatful father, Harald, and being at the Academy was the first time she was able to live out from under his thumb. But early on I kept thinking she felt younger, and I’ve put this down to the Vampire Academy mixed with Norse mythology vibe that was going on – FYI I was loving that vibe, it just felt more high school than university.

Hauk our love interest: Hauk Sigridsson, the headmaster of BjØrneskalle. I never really got a gage on how old Hauk was. As the reader we surmise that he came into his high position at the Berserker Academy due to his superior fighting skills and his legendary Mother’s supreme warrior reputation, not his age. It is only remarked that age is hard to determine with Mythicals, and that the eyes are the only way to tell. It is said he had young eyes.

Hauk trains one on one with Elin, at first seemly to help her catch up and adjust to academy life. This storyline changes as Haul asks Elin to accompany him on a dangerous quest. A quest that involves traveling into dangerous lands, dealing with deadly Fae, fighting desire and recovering the prized immorality stone.

I must say that I did love that gender did not factor into how good of a warrior you were. The girls and the guys were equally kick ass.

There were events near the end of the book that I didn’t see coming. I actually said Oh Shit out loud at one point. A book hasn’t blindsided me like that in ages – cheers to you Amy Pennza.

The classification: This book is listed as Adult Urban Fantasy Romance. I assumed there would be graphic sex coming at some point and that’s why this was classed as an adult book, rather than New Adult. The sex doesn’t come to later in the book and it is primal, it’s hot and heavy and at one point I stopped and thought – Yes, I can see why she’s made Elin 21 or the whole thing Hauk wouldn’t have worked, and I don’t think I’d have been comfortable reading those scene knowing the character as any younger. I don’t think you necessarily need to be an adult to read this story. 17-year-old me would have loooooved this book. I mean come on, kids these days are watching worse stuff on the internet, at least Hauk and Elin care about each other and aren’t some pool boy and horny housewife combo – that’s all I’m saying.

All in all, I did enjoy this book. The writing flowed well and the fast, yet steady pacing made for a quick and entertaining read. I would happy read more works by Amy Pennza.

About the author: Amy Pennza has been a lawyer, a soldier, and a copywriter. She’s worn combat boots and high heels in the same 24-hour period–and she definitely prefers flip flops. Actually, she prefers going barefoot while writing steamy romances about strong women and alpha men with hearts of gold. After years in Tornado Alley, she now makes her home in the Great Lakes region with her husband, kids, and more baskets than any one person should own. (You can never have enough.)

Thank you to Silver Dagger Book Tours for my review copy.

One thought on “Daughter of Rage and Beauty: Review”