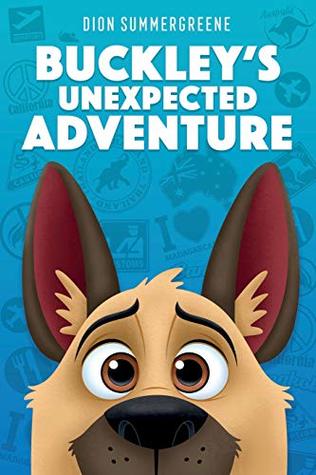 Buckley, a young, enthusiastic detector dog, was about to clock off from his regular shift at the Brisbane International Airport when he uncovered a shipment of smuggled exotic animals. Discovering that all but one, a chameleon named Ciara, and two turtle eggs, had perished on the long journey, Buckley makes it his mission to track down who is behind the smuggling ring and ensure no more helpless and endangered animals are killed. A fire is ignited within Buckley and he is determined to return Ciara to her home and reunite her with her family. Breaking all of his obedience training whilst battling his usual insecurities and self-doubt, Buckley, Ciara and a charismatic Californian mouse named Bo, set out on an international adventure that propels them from a world of structure and safety into dangerous, risky situations.With fast-pace, witty humour and suspense, Dion Summergreene takes young readers on a crime-fighting adventure like no other to discover an exotic world through the eyes of man’s best friend.

In this new #LoveOzMG title, Buckley the detector dog discovers a crate of smuggled animals. He befriends the only surviving chameleon, this leads to a return smuggling plan of his own. Cue wacky hijinks, plane flights, run ins with other not so friendly animals, police chases, and unintentionally bringing down a major smuggling ring in a Bangkok shipping port.

Buckley’s Unexpected Adventure reads like a Pixar movie and I mean that as a compliment.
It’d make a hilarious movie. Think Zootopia, crossed with The Secret Life Of Pets, and Isle Of Dogs.

As an adult I can appreciate all the lessons Dion is trying to fit in about animal cruelty, illegal animal trade, animal facts and general life lessons as part of and in and around the plot. I do wonder if it will make the intended MG audience’s eyes glaze over. If it will be information overload or if they’ll be enthralled by it, soaking it all up with their wonderfully young sponge brains – I hope for the later. And never the less the action sequences are fantastically entertaining and humorous.

The ending is super cute and of course the good guys win and it’s a happily ever for Buckley and his friends.

Buckley’s Unexpected Adventure is available as an eBook or paperback HERE.

Dion Summergreene has worked as an art director and illustrator for the past 20 years, now making his writing debut with Buckley’s Unexpected Adventure being his first published book. Visit www.buckleysadventure.com to learn more.