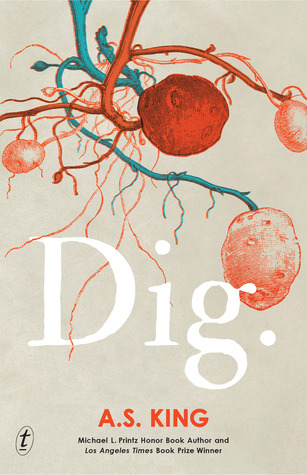 The Shoveler, the Freak, CanIHelpYou?, Loretta the Flea-Circus Ring Mistress, and First-Class Malcolm. These are the five teenagers lost in the Hemmings family’s maze of tangled secrets. Only a generation removed from being simple Pennsylvania potato farmers, Gottfried and Marla Hemmings managed to trade digging spuds for developing subdivisions and now sit atop a seven-figure bank account, wealth they’ve declined to pass on to their adult children or their teenage grand children.

“Because we want them to thrive,” Marla always says.

As the rot just beneath the surface of the Hemmings precious white suburban respectability begins to spread, the far flung grand children gradually find their ways back to each other, just in time to uncover the terrible cost of maintaining the family name.

I finished reading Dig by A.S.King the other day and I still can’t figure out what I want to say about it.

I part hated it (some of the characters are truly disturbing and examples of the worst parts of humanity) and I part loved it (there were three characters I connected with and the last quarter of the book made up for the first three quarters).

It is skillfully written and tackles some dark stuff. I feel like it’s the kind of novel that should be read and dissected in a high school English class. King is a phenomenal writer and isn’t afraid to get dark with it.

The story jumps between six characters, with each short chapter alternating the POV. The jumps never get confusing, it is rest-bite from the not-likable to the likable characters. It created a balance and pushed the story along.

This is not a light read, it tackles: terminal illness, poverty, physical & sexual abuse, parental neglect, racism, white privilege and the danger of family legacy.

Dig is Intense and at times it gets real dark! It’ll make you uncomfortable, and if it doesn’t, there is something wrong with you. But the journey that is reading this book is worth it in the end.

Dig is a story about the way our actions tunnel down and affect those around us, generation after generation. A story about digging our way out from under our past and moving forward to better future.

One thought on “Dig by A.S. King: YA Review”