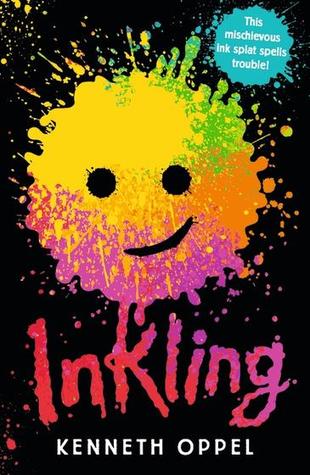 Ethan’s dad is a comic artist whose greatest creation, the mutant superhero Kren, brought him fame and glory. But after his dad’s string of successful books, a tragedy strikes the family and now his dad is completely stuck.

If only artistic talent were hereditary. Ethan is stuck on a graphic-novel project of his own at school and won’t own up to the fact that he can’t draw. When one night an ink-blot creation emerges from his father’s sketchbook, the family’s whole world begins to change.

On the surface this is a light, fluffy and fun read about a boy who makes friends with an animated splotch of ink who can do extraordinary things. Down deeper it deals with grief and mental illness.

The story follows Ethan a loving and caring young boy as he deals with the life left behind after his mother’s’ death. His father, a comic book writer and artist by trade is not coping with the loss of his wife and as such the duties of looking after the house and his 9-year-old sister who has down syndrome fall on Ethan’s shoulders. It’s never stated how old Ethan is. But the feeling I got reading the story is that he’s somewhere around 11-12 years old. A sweet and caring boy that circumstance has made mature for his age, but he hasn’t hit his teens yet – that was the vibe I got.

Rickman the overweight cat provides humorous relief throughout the book, as does Inkling himself.

There are the high-jinks of Ethan getting caught with Inkling, Inkling being inknapped, a rescue mission and so much more.

Inkling by Kenneth Oppel is a glorious book. It hit a lot harder than I was expecting when I went into it. But it weaved a beautiful story of a family drowning in, then overcoming their grief. The ending leaves you with a warmness in your heart.

One thought on “Inkling: MG Review”