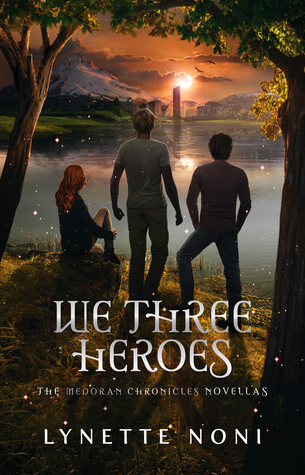 “We all have to do our part if we’re to survive the coming storm.”

Alexandra Jennings might be the hero of The Medoran Chronicles, but she would be lost without her three closest friends. They are her heroes, and like all heroes, they each have their own story.

Meet the real D.C. in Crowns and Curses and discover how she becomes the princess Alex once despised but now adores.

Follow Jordan on his healing journey in Scars and Silence as he struggles in the wake of being rescued from his living nightmare.

Walk beside Bear in Hearts and Headstones as he faces an unspeakable trauma while helping his world prepare for the coming war.

D.C., Jordan and Bear are the heroes of their own stories.

It is time for their stories to be told.

I read Akarnae and Raelia back-to-back and was blown away. I devoured Draekora and Graevale as soon as I could. So you know I was super excited when Pantera and Lynette Noni announced We Three Heroes. Stories told from the POV of Alex’s besties while I’m waiting for Vardaesia to be released, hell yeah!

D.C.’s Story – Crowns and Curses. In this short we get to experience what made D.C. the sassy ice queen supreme we first meet in Akarnae. We then follow her healing journey and see her become the loyal and loving friend we know from books 2-4. Themes: bullying and friendship.

Jordan’s Story – Scars and Silence. At a first glance Jordan appears to be just an adorable cheeky ruffian with cool disappearing powers, but through this short we get to dive deeper into the boy and recover with him as he deals with the blows he received from Aven in books 2-3. Themes: suicide, family expectations, loss of loved one.

Bear’s Story – Hearts and Headstones. I knew from Graevale what was coming but living the battle again through Bear’s eyes still made me tear up. Unlike the previous two stories I didn’t feel I learnt anything new about Bear, but we did get to learn more about Declan’s past. Themes: loss of loved one, strengthening friendships, war.

I really enjoyed this book. It allows us to get to know the side charters better and I think getting a deeper understanding for them will make the final instalment all that more epic! Bring on VARDAESIA!

I still haven’t forgiven Noni for chapter 33 in Graevale, and my forgiveness hinges on three things I hope go down in Vardaesia regarding Bear and Declan, Alex and Kaiden, and a certain MIA winged Draekorian.

Noni’s The Medoran Chronicles are top notch. If you are a fantasy fan of any age or a #LoveOzYa supporter, then they are a MUST READ! The series has it all; action, adventure, a kick ass heroine, fantastic side characters, friendship, humour, romance, deeply built parallel worlds, humans with fantastical abilities and immortal beings.

I’m running off talking about the series aren’t I – oops – and this is supposed to be a review of We Three Heroes. In my defence it is an amazing series and the stories in this book weave through the timelines of the first four books.

Who would enjoy this book: fans of Noni’s Medoran Chronicles. This novella compendium is a MUST for fans of the series, but unless you’ve read the first four books and loved them, it’s not for you – too many spoilers and too many things you need to already know for the stories to flow.