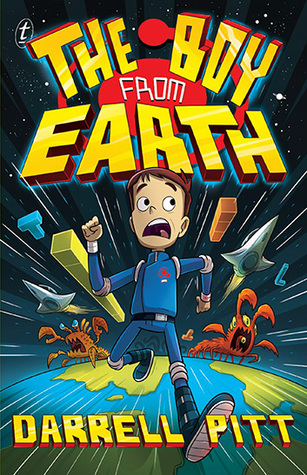 A new laugh-out-loud space adventure from the author of A Toaster on Mars and the Jack Mason Adventure series.

Twelve-year-old Bobby Baxter’s not the bravest kid on Earth.

His list of things that scare him is up to number 689, and includes lightning, crowds, spiders, alien abductions, crocodiles, falling from great heights, falling from small heights and eggs.

So, when he learns that he’s the first Earthling ever chosen to attend the Galactic Space Academy, light years away from home, he’s terrified—and that’s before he discovers that someone at the academy wants the boy from Earth gone.

The Boy from Earth is a witty sci-fi adventure about facing our fears and making sure to have a little fun along the way.

‘No child from Earth has ever been chosen to attend the Galactic Space Academy.’ The hologram’s eyes narrowed on Bobby. ‘Until now.’
‘Why me?’ Bobby said, bewildered.
‘It’s a mystery to me,’ the hologram assured him.
‘What if I don’t want to go?’
‘You may reject our offer,’ the hologram said. ‘But it would reflect badly on Earth. Not that people are thinking Earth is backward and primitive,’ he hastened to add. ‘But if they were thinking it…well…they’d be thinking it even more. If you know what I mean.’

The Boy from Earth by Melbournian Darrell Pitt is a super fun Middle Grade adventure novel set in outer space.

It Reads like an early Harry Potter meets early Hitchhiker’s Guide to the Galaxy book – I say early as both series got deeper and darker as they when on. While adult me did find The Boy from Earth to be a light and fun read, I do think it is better suited to the younger audience, the 8-12-yr-olds it is intended for.

The main character of this MG Sci-Fi is a boy named Bobby. Bobby was easily likeable, and you couldn’t help but root for he and his friends to succeed and survive their time at the Galactic Space Academy.

The story focuses on friendship and team work. Bobby’s friend/enemy relationship with Targ was a highlight for me, as it showed compassion and allowed for the growth of both characters.

Riley spotted me reading The Boy from Earth and was entranced by the cover, he asked me questions about the book and kept looking over my shoulder. He was disappointed there weren’t many pictures, but still fairly interested. Riley is only in kindergarten and will be turning five next week. I told him we would read it together in a year or two.

2 thoughts on “The Boy from Earth: MG Review”