Gabrielle Reid is an Australian author based near Newcastle, NSW. She has previously worked as a high school English teacher and still does creative writing workshops in schools from time to time. Gabrielle has published short stories in a variety of literary journals and regularly posts on her website and blog at http://www.justkeepreiding.com. The Things We Can’t Undo is her debut novel, published by Ford Street. It is available from May 1st in Australian bookstores (links at the end).

Time to hand it over to Gabrielle.

If you ask me what the key themes are in my novel, The Things We Can’t Undo, top of that list has to be consent. It’s about other things of course – friendships, reputations, social media, secrets – but the primary issue from the very first chapter is: did Dylan (my main character) rape his girlfriend Samantha? And is it possible for justice?

“ – that no means no, drunk means no, off your face means no, and I don’t know/I’m not sure means no…
… And never forget, kids – sex is a joyful, integral expression of being human. It’s fun!”
– Fiona Wood, Wildlife, chapter 61

In the past five years or so, the conversation about sex and consent has shifted, as victims of assault and abuse are given more space to tell their stories and feminists work harder to repeat the message: this was not your fault. Thanks to this openness and the recent #metoo movement, it’s getting harder and harder for people to pretend that sexual harassment and assault is a rarity committed by strangers in dark alleys just waiting to prey on girls walking alone.

I think, however, the message is doing a better job of reaching women than it is reaching men. There’s a tendency for men to get defensive – either crying #notallmen or throwing up their hands and declaring it’s too hard to know where the line between flirting and harassment is anymore. And in a way, this is understandable. I’m not a man, but I am white, and if there’s one thing white Australians are good at, it’s declaring we’re not racist while simultaneously enjoying the privilege that racism gives us. It comes down to intention. We think that because we don’t mean to be racist, then we’re not. And I wonder, is it the same for men committing assault?

Ask a roomful of young men if they would ever rape someone. I doubt any are going to say yes. I doubt any are even going to think “yes, if I had the opportunity and knew I could get away with it”. But the statistics are frightening, and there’s no way all of these assaults are being committed by sociopaths who go out of their way to hurt people.

So I began to wonder, what would it be like to be a teenage boy who believes he is a “nice guy”, who is seen by others as a good person, who says and thinks he would never rape somebody, and yet, who does?

“Whatever else I might have done to be a bad boyfriend or to somehow hurt her, I know I’m not a rapist. You don’t accidentally rape someone.”
– Gabrielle Reid, The Things We Can’t Undo, chapter 7

In my book, Dylan and Samantha have a prior relationship. I needed him to genuinely care about her, so the accusation would be even more baffling to him and to those who knew him. If he was too evil, too irredeemable, then no one would relate to him. I also needed him to have redemptive qualities for my own sense of security in the world – I have to believe that it’s possible, with education and empathy, to prevent people from becoming perpetrators.

When you write about a topic like this, there’s constant questioning that goes through your head. Would people misread it as blaming Samantha for not being more confident? Was I silencing her voice by not giving her a first-person narration? Does Tayla, Samantha’s outspoken best friend, give feminism a bad name, or are her good intentions clear? Do boys like Dylan actually exist, or was I being naive to write about them?

The story was in my head for years before I put pen to paper. I had the opening scene and the ending so clear before I knew what was going to happen in the middle. In the end, I couldn’t not write this book. And I decided that if putting it out in the world meant some people would hate it or be angry with me, that was a risk worth taking to start conversations.

Because when it comes to consent, the conversation needs to be had – time and time again. 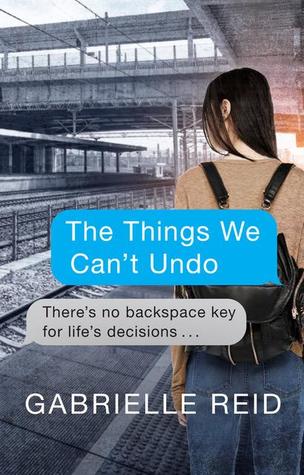 The Things We Can’t Undo by Gabrielle Reid

Samantha and Dylan are in love – everyone knows it. So it’s no big deal when they leave a party for some time out together. But when malicious rumours surface about that night, each feels betrayed by the other.

Will Sam make a decision she can’t take back?

I will be reading and reviewing The Things We Can’t Undo a little bit later on, so check back in if you are interested in my thoughts 🙂
As always, thanks for visiting The Adventures of SacaKat

and Until next time, enjoy your shelves 🙂