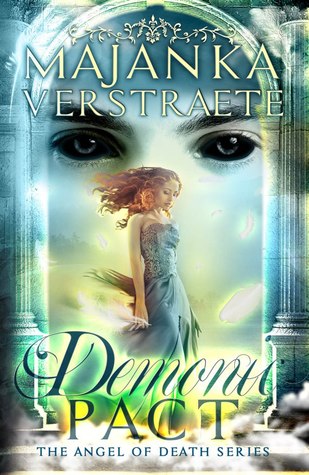 Sixteen-year-old Halfling Angel of Death Riley Scott is on a dangerous mission. To save her friend’s life, she must make a pact with the man who just tried to kill them both and break him out of the Celestial Prison, guarded by Angels of War—fearsome warriors who can squash her like a fly. If caught, she’ll be sentenced to eternity in that impenetrable prison. Riley will have to make deals with demons and her number one enemy, turn her back on her most loyal friends, and risk losing her family forever. Worst of all, her very existence is in the hands of her devious new allies.

Angels, Witches and Demons, OH MY.

The Demonic Pact is the second book in The Angel of Death series, a YA urban fantasy/paranormal series following the life of Halfling Angel of Death, Riley Scott.

The 1st chapter gives a good sum up/refresher of the key points from the first book. The information is delivered quite well and doesn’t feel like an info dump, more like you’re having a conversation with Riley. It created a strong start to the book and got me amped up to continue on. I read the first book back in 2015, so I really appreciated the refresher. I actually think it might have been detailed enough that you could enjoy this book without reading the first one.

Riley Scott is an easily likeable character. She’s still only relatively new to the whole angels and demons are real thing. And she is still pissed off no one let on about her Angel of Death daddy (whose identity has yet to be revealed, maybe in book three?)

The supporting characters from the first book are back along with some intriguing new ones. The cursed Damien being a favourite for me. Here’s to seeing more of him in the next book *raises coffee cup in salute*.

The Council of Angels still seem to be out to get Riley, one member in particular. I disliked most of the Angels in the first book and this book has done nothing much to change that. The parts of this book I enjoyed the most didn’t involve the other angels, but rather Riley’s dealings with witches and demons.

Throughout the two books Riley is unreasonably hated on for being a halfling – Because you know it’s her fault and she can totally control the way she was born – I’m not sure if it was the author’s intention, but it totally feels like a representation of mixed race hate-ism and I love it for that. I think I just made up the word Hate-ism but I’m sticking to it.

The book finishes on a major cliffhanger. Ah Majanka why. Damn good ending though.

My Review of The Soul Thief

Thanks for visiting The Adventures of SacaKat.
It you want to make my day, just Like this post, simples.