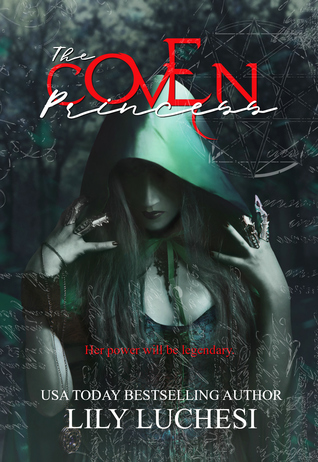 The Coven Princess
by Lily Luchesi
Genre: YA paranormal
Publication: March 7th 2018
Publisher: Vamptasy Publishing
Source: Review copy from Author
Thank You Lily
Your blood does not define you.
Harley Torrance’s parents were killed in a home invasion when she was three. Adopted by a nice couple, Harley begins to develop strange powers. At fourteen she brews a potion so strong it gains the attention of the Coven King, and changes her world forever.
She’s not human, she’s a witch.
Now a part of the magical community, Harley must learn to control her powers lest the Darkness already in her blood overcomes her. Can she dampen her lust for power in order to stop the Dark from taking over the Coven and killing everyone in their way?
My Rating: ♥ ♥ ♥ ♥
My Thoughts:  I’ve read works by Lily Luchesi varying from paranormal crime thriller novels to erotic story stories – all fantastic. This is Lily’s first foray into young adult fiction. The Coven Princess is reminiscent of Harry Potter, but I preferred the parts that were pure Lily. It is set in the same world as Lily’s Paranormal Detective Series. Fans of the series will enjoy the names and events that are referenced throughout the story – It is not necessary to have read lily’s previous works, this is a standalone YA novel.

The story starts off with a strong Prologue. A brilliant little fast recap of protagonist Harley’s life up until the point the “story” starts. It sucked me in. I finished the Prologue and my head was buzzing with excitement.

After years of being bullied at school for dressing “differently” and her “strange” behaviours, Harley’s hopes are high that she’s going to get a fresh start within the coven. She hopes that she will finally be with people that will understand and accept her the way she is. Unfortunately for Harley just after she starts at the coven’s school bad things start happening there. A girl is killed within days of Harley starting at her new school and all hell proceeds to break loose.

The story is set up in four parts, with time skipping forward in-between. With each jump Harley grows, progressing from 14-year-old paranormal world newbie, to a mature 18-year-old potion making prodigy. I enjoyed Harley as a protagonist. And love, love, loved the first section of the book with all the kiddie witches getting to know Harley, being all teenagery and all their school goings on.

Of course, there is a big bad guy who wants to use and abuse Harley’s magical abilities, but she has good friends and talented family members that help her ultimately triumph over evil.

About the author:
Lily Luchesi is the USA Today bestselling and award-winning author of the Paranormal Detectives Series, published by Vamptasy Publishing. She also h
as short stories included in multiple bestselling anthologies, and a successful dark erotica retelling of Dracula.She is also the editor, curator and contributing author of Vamptasy Publishing’s Damsels of Distress anthology, which celebrates strong female characters in horror and paranormal fiction.She was born in Chicago, Illinois, and now resides in Los Angeles, California. Ever since she was a toddler her mother noticed her tendency for being interested in all things “dark”. At two she became infatuated with vampires and ghosts, and that infatuation turned into a lifestyle. She is also an out member of the LGBT+ community. When she’s not writing, she’s going to rock concerts, getting tattooed, watching the CW, or reading manga. And drinking copious amounts of coffee.
Newsletter | Facebook | Twitter | Website | Instagram | Pinterest | Goodreads

One thought on “The Coven Princess: YA Review”