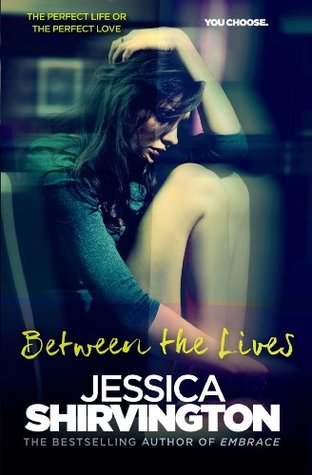 Between the Lives by Jessica Shirvington

Sabine isn’t like anyone else. For as long as she can remember, she’s had two lives. Every twenty-four hours she “shifts,” living each day twice. In one life, Sabine has everything: popular friends, perfect grades, expensive clothes, and the guy everyone wants. In the other, Sabine’s family struggles financially, and her friends are considered rebels. But then she meets Ethan. He’s gorgeous and challenging, and he makes her feel like she’s never felt before.

All Sabine really wants is the chance to live only one life. But when this finally becomes possible, is she willing to risk everything – including losing the one person who might actually believe her – to make it happen?

My Thoughts: I LOVED loved loved Shirvington’s Disruption duology, so I had extremely high hopes for the quality and my enjoyment for this book – and it lived up to them. I found this book to be super cute and easy to get into. I easily connected with Sabine and felt for her plight. The love interest was to die for, or rather to live for (you’ll understand that if have you read the book) Between the Lives is the story of a young woman literally living two lives. *WARNING it’s a Tearjerker* Oh how I cried!! But the ending did make up for the tears, leaving me warm and fuzzy inside.

Moving to a space station at the edge of the galaxy was always going to be the death of Hanna’s social life. Nobody said it might actually get her killed.

The sci-fi saga that began with the breakout bestseller Illuminaecontinues on board the Jump Station Heimdall, where two new characters will confront the next wave of the BeiTech assault.

Hanna is the station captain’s pampered daughter; Nik the reluctant member of a notorious crime family. But while the pair are struggling with the realities of life aboard the galaxy’s most boring space station, little do they know that Kady Grant and the Hypatia are headed right toward Heimdall, carrying news of the Kerenza invasion.

When an elite BeiTech strike team invades the station, Hanna and Nik are thrown together to defend their home. But alien predators are picking off the station residents one by one, and a malfunction in the station’s wormhole means the space-time continuum might be ripped in two before dinner. Soon Hanna and Nik aren’t just fighting for their own survival; the fate of everyone on the Hypatia—and possibly the known universe—is in their hands.

But relax. They’ve totally got this. They hope.

My Thoughts: Bloody Brilliant! I LOVED it! No surprises there, I loved Illuminae. I’m only sorry it took me so long to read book two. The positive is that I don’t have long to wait for the third book, Obsidio 🙂 YAY! It’s out next month (13th March 2018).

I love the way The Illuminae Files story is told, the way the books are set out. I think it makes them stand out from all other YA sci-fi. They are textual masterpieces.

In this book we get to meet some new characters (I ship Hanna and Nik, and think Ella is the bomb) and catch up with some old faves (woop woop hello again AIDAN, Kady and Ezra). The BeiTech baddies continue their debauchery and the ending leaves you NEEDING the final book.

Nicholas begins to overthink everything as he struggles to prove he deserves his place at Kings Row.
Published: 21st February 2018. #LoveOzYA Reading Source: Purchased eComic.

My Thoughts: Damn I love this series! Four issues in and I’m beyond hooked. Some of the boys are so sassy and snarky, I LOVE it. I’ve always been a sucker for an underdog story, but who would have thought I’d be a fan of fencing? I really enjoy “watching” the fencing as well as the character interactions/relationships. Thank you C.S. Pacat – Awesome stuff.

Thanks for visiting The Adventures of SacaKat.
It you want to make my day, just Like this post, simples.