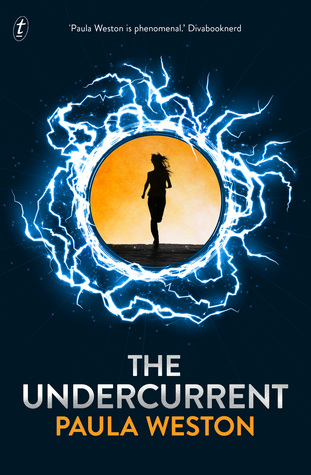 Eighteen-year-old Julianne De Marchi is different. As in: she has an electrical undercurrent beneath her skin that stings and surges like a live wire. She can use it—to spark a fire, maybe even end a life—but she doesn’t understand what it is. And she can barely control it, especially when she’s anxious.

Ryan Walsh was on track for a stellar football career when his knee blew out. Now he’s a soldier—part of an experimental privatised military unit that has identified Jules De Marchi as a threat. Is it because of the weird undercurrent she’s tried so hard to hide? Or because of her mother Angie’s history as an activist against bio-engineering and big business?

It’s no coincidence that Ryan and Jules are in the same place at the same time—he’s under orders to follow her, after all. But then an explosive attack on a city building by an unknown enemy throws them together in the most violent and unexpected way.

This #LoveOzYA Sci-Fi is sure to please with its sweet romantic subplot and poignant back drop of a not-so-distant future Australia.

This story has it all; big business bullying, blackmail, corporate corruption, attempted murder, unsanctioned secret military trials, genetic modification of crops and livestock, as well as the continued and worsened struggles of living and working on the land and potential nuclear disaster.

The way the world is going the plot seemed rather plausible and for the most part I didn’t feel like I was reading a Sci-Fi – more like a contemporary YA thriller written 20 years early.

The story rotates between four POV’s – Jules, Ryan, Jules’s mum Angie and Ryan’s boss Major Voss. I found that even though the rotating really amped up the pace, it was a little frustrating at times. I’d be really getting into the action, the chapter would end, and then I’d be somewhere else with someone else. It had me tearing through the pages at a ferocious pace to find out what was happening, everywhere with everyone – Frustrating, yes. But it made the book unputdownable, so I guess that’s actually a good thing. Right?

The ending was a bit of a letdown – as in – I wanted it to keep going. I wanted to see what ended up happening with the Paxton’s, and Angie and Voss. But mainly I just really wanted to keep hanging out with Jules, Ryan and Tommy for a while longer. And to see how Jules and Ryan’s lives together unfold. I already know that they are characters that will linger in my mind for a long time.

On the cover of the copy I read there is an orange star that proclaims “Guaranteed Great Read” and it’s speaks the truth people!

2 thoughts on “The Undercurrent: #loveOzYa Review”