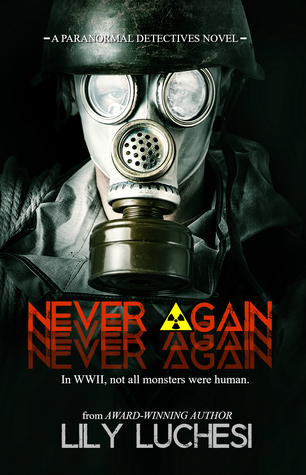 In this standalone spin-off of the Paranormal Detectives Series, we discover the true horrors during Hitler’s reign.

In World War Two, not all monsters were human.

Male siren Sean Wireman was ostracized from his small village in Israel in the sixteenth century, forced to wander the world until he settled in America in the 1920’s. Since he doesn’t age like a normal person, he was fit to fight in World War Two, to defend the heritage he spent his whole life running from.

Seventy years later, after he has lived a whole other life since Hitler was defeated, from attending law school to becoming a bona fide rock star, the monsters the Nazis released upon the Jews in concentration camps have returned, and he is the only one who can destroy them.

But can he save his people once again, or will this fight take a deadly toll?

I finished reading Never Again and pondered the book producing powerhouse that is Lily Luchesi. I think Never Again is my favourite book of hers to date and i’ve read quite a few since coming across her looking for reviewers for Stake-Out (PDS#1) in a goodreads request group. It feels like forever but when I looked it up it was actually early 2015. Damn Girl, you have bled out a phenomenal amount of words in the last three years. I’ve enjoyed Lily’s writing from the beginning, but it feels as if she’s found her rhythm, her knack and she’s grown confident and is owning her style now.

Lily has really outdone herself this time with Never Again. The writing is strong and confident, the story compelling, a blend of paranormal and real world historical events.

There is swearing. There are some extremely deplorable and violent bad guys (obviously as a large chunk of the book features war). As well as post-traumatic stress disorder being explored in detail. But there is also love and hope to balance out the hate and despair.

The story’s sole protagonist is Sean, a 526-year-old male siren who originated in Israel. Thanks to his slowed siren aging process for the most part of the story he only looks like he’s aged between 20 to 40.

526 years – does he have a story to tell? You bet he does. His life story. 526 years, experiencing ancient Israel, the Ottoman Empire, the Tudors, the Nazis and modern rock and roll. Sean is, despite his species and the fact he regularly refers to himself as an asshole, a good guy and a war hero.

So yes this is a Paranormal Detectives Series Spin-off and if you’ve read any of the PSD books you’ll recognise a fair few characters and locations. But if you haven’t that’s okay, this this is a stand alone and a great way to get a feel for Lily’s writing style.