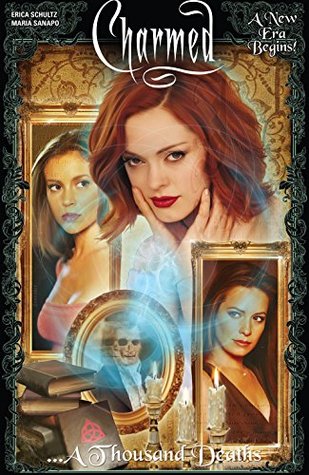 Dynamite Entertainment is proud to continue the story of Phoebe, Piper, and Paige, television’s fan-favorite witches, in all-new adventures set within the official continuity of Charmed!

A dark force has set its sights on the art world of San Francisco, utilizing a gallery exhibit to feed souls to the underworld and unleash demons into our reality. Only the Power of Three, harnessed by the Halliwell sisters, can stop the madness!

Nevertheless I call myself a Charmed fan so I was determined to love Dynamite’s take on my favourite sister witches. I pre-ordered and read the first two issues and while I enjoyed them, It all felt a little lacking. My favourite thing about the Zenescope comics was seeing the girl’s children come into their powers and there whole larger family dynamic. I didn’t go on to buy issue three, but when I saw this combined edition on Edelweiss I knew I had to give the whole story arc a go. *spoiler* Possessor demon!

A Thousand Deaths combines one story arc spaced over five issues and I assume that the story was set around the third/fourth season. Leo is always around the manor, but Cole is not. Cole is mentioned in passing as being Phoebe’s lawyer, but that is all. I LOVED COLE, oops sorry.

The Bad: I really did find it hard at times to visually tell the sister’s apart and some of the photo covers were a rather odd.

The Good: It still had the TV show feel to it, be it the earlier episodes. I could hear the actresses’ voices as I was reading the dialogue.

I think this new version of the charmed ones is for all the hardcore fans. So, if you want to step back in time and are dying to hang with the sisters again, race out and buy a copy. I’m planning to buy Charmed #6, as I’m keen to see where Dynamite takes the sisters next.