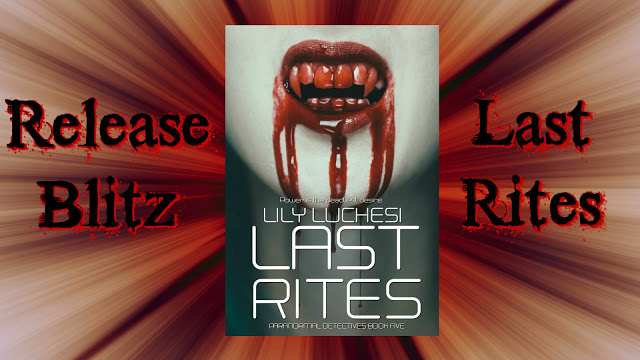 NOW AVAILABLE ON AMAZON KINDLE!
FREE if you use Kindle Unlimited!
Last Rites (Paranormal Detective Book Five) by Lily Luchesi
Power is the deadliest desire.
With Leander put to rest and the Paranormal Investigative Division taken care of by the Coven Mistress, Danny and Angelica are finally ready to take some time for themselves while Angelica gets used to her new role as the Empress and they make their relationship official.
When people close to Angelica are murdered by what seems to be a rogue vampire, their sabbatical is cut short in order for her to find the perp and execute him or her.
But this is no ordinary vampire. When the truth is revealed and secrets come to light, it will prove to be Danny’s biggest test of faith yet, and Angelica’s reckoning of her past, present, and future. Most of all it will raise a single question: just what makes a monster?

Check out the trailer, featuring the song “I Don’t Drink, I Don’t Smoke, But I Lie” by Peter Blast.

My Reviews of Books 1 to 4: Stake Out, Miranda’s Rights, Life Sentence and Right To Silence. 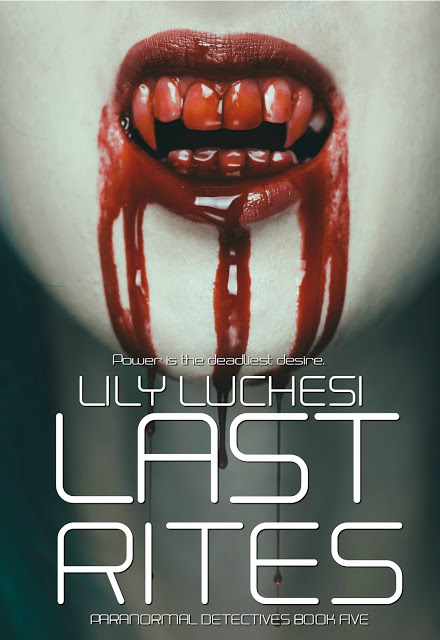 MY THOUGHTS
In book five we get to delve deeper into Harriet’s past, see Danny and Angelica get married, meet the first ever Vampire and experience the epic end of an era. We meet new friends and in true Paranormal Detective Series form, lose old friends as well.

At about the 50% mark Danny was really pissing me off, just turning his back on Angelica. But once the drama queen comes to his senses it is an emotional sprint to the end.

There are twists and turns throughout this book, some I saw coming, some I did not. Not that I can mention any of these without giving away the major events of the story. I really want to tell you all about who betrays Harriet, who Augustus’s heir turns out to be and who gets turned into a vampire – but these are things you’ll have to find out for yourself.

The end of book five (and that killer Epilogue) lines up an exciting new direction for the last two books in The Paranormal Detective Series (Skin Deep 2018 & Day of Execution 2019). But between now and then is a spin off, Never Again (December 5th 2017), set just after Last Rites following Sean Wireman’s character.

I think Lily has out done herself this time and dare I say it this might even be my favourite so far.