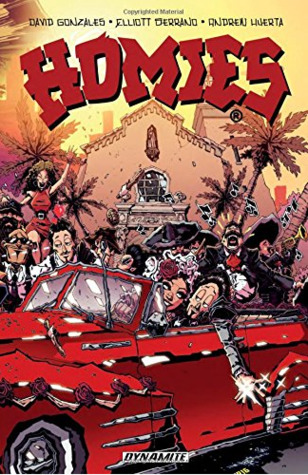 It’s time to go back to the barrio with the Homies!

The pop culture phenomenon that took the 1990s by storm returns with brand-new hijinks co-plotted by the creator of Homies himself, David Gonzales.

In Barrio Quien Sabe, the entire community is one big familia, laughter and good times are the perfect cure for reality, and the Homies love their lowriders like they love their ladies: painted, sexy, curvy, and dressed to kill.

Follow the colorful, oddball characters in four wild adventures: the wedding of Gata to would-be bachelor-for-life Hollywood, a charity match of rival luchadores to save the neighborhood community center, the haunting of the Mexican legend La Llorona, and the arrival of an illegal alien… of the extraterrestrial kind! Welcome to East Los Angeles, ese!

“Written with heart and authenticity… worth the price of admission for the art alone.” – Outright Geekery

“Heart, comedy… that will please any reader. 98% Nerd Score!” – PopNerdTV

Homies is a collection of four separate stories featuring (for the most part) the same key characters.

Story uno* starts off with a wedding that was drama filled and almost didn’t happen. Other than a few redeeming speeches by the narrator, I wasn’t really a fan of this story. The story was lacking to me because I had no connection to the characters. If you we’re a previous fan or a least familiar with the Homies characters the reading experience would be different.

The whole tone of the comic improves with story dos* with a wrestling match to raise funds for the community centre. By this point I’d warmed up to the characters, the style, the humour and the heart.

My enjoyment only grew with story tres* which involved a prank show and a ghost haunting the broken hearted.

Story cuatro* was by far the best for heart and humour, featuring an alien from outer space that turns out to be a hot shot mechanic and finds himself a home on earth and in The Barrio.

For the most part the story was in English, there were a few Spanish words in the mix, but what the characters were saying was easy to understand. At first, I found the artwork sharp and harsh but it grew on me and I enjoyed it in the end. All in all I think the style really suited the stories.

Once I warmed up I found this comic to be a quick and enjoyable read. The later two stories earning it a four star rating.

*Uno Dos Tres Cuatro = One Two Three Four. If you didn’t figure that out before you got here you must never have heard a PitBull song before.