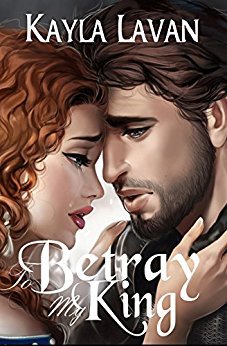 To Betray My King by Kayla Lavan

Would you choose to save your kingdom or follow your heart?

Brave and kindhearted, Arianna is a princess of a kingdom that nobody wants. The magicless. Marrying the charming, flirtatious, and egotistical Prince Roland was the last thing either of them wanted, but for the sake of their people they agreed. War breaks out with the neighboring kingdom, forcing the prince’s hand to join in the fight. He leaves his new wife with the only man he trusts, his childhood friend, a dutiful, strong, and handsome knight.

A sweet romantic tale of forbidden love in a dark fanatical world.

I enjoyed stepping into Ms Lavan’s medieval world of Sol and meeting the magic weavers she has filled it with. I struggled a little with the male leads at first. While I really enjoyed the playful banter and friendship between Prince Roland and his bodyguard/best friend, Conrad, it took me a while to warm up to either of them as love interests for Princess Arianna. Princess Arianna was easily likeable. She was kind hearted and always looking to improve herself, be it mentally or physically (e.g. learning to sword fight).

The story starts off following Roland, Conrad and Arianna. Their day to day lives, before, during and after the arranged royal marriage. But when Roland goes off to war we are left behind with Conrad and Arianna. I wish we could have followed Roland into War!!!

The whole time I was reading it felt as if Ms Lavan was preparing Arianna for something big. We kept being given tastes of Arianna’s archery skills and magical status/abilities and it felt like this was building to something bigger. Well, she did get to kick some butt in the end.

This felt like the first in a series, if that makes sense. A lot of set up with a dramatic actioned packed ending propelling you on to read the next book. There even is a Twist at the end that I didn’t see coming and the ‘betrayal’ goes down not as you expect.

Even with his man-whore start to the story, Prince Roland ended up being my favourite character and I am looking forward to reading more from Ms Lavan and finding out how he handled becoming King.

I’ve been writing half of my life, starting at the ripe old age of 13. Back then my favorite pass time was doodling in class, sleeping in class, and studying tests or homework that was due the next class period. But by night I lead a secret life. I would go home, turn on my computer, and get on my dialup Internet (which makes me sound really old) and I would write. At first it was for fun. I was brave back then and posted everything online. In the 14 years I have been writing, I have posted over 1.5 million words, all of which is still available to read for free. My most well known story being “Fun ‘N’ Games at Ouran”. A year or so ago I posted a one-shot that was 50k-60k in words. Afterwards, I looked at it laughing, and said to myself “I think I would like to get paid for this now” and then ‘To Betray My King’ was born. It seems so simple as I’m sitting here, typing this foryou to read, but it’s the truth. ‘Betray’ is my first book, but it won’t be my last. I love writing. I would never give it up for anything in the world.

#1 To Betray My King (Available Now)

#2 To Betray My Kingdom (Coming Soon)

#3 To Betray Myself (Coming Soon)