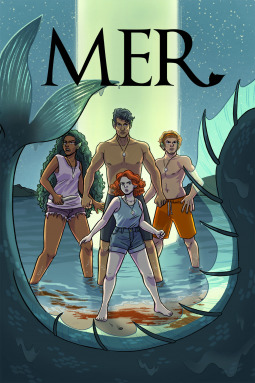 After the death of her beloved mother, Aryn’s father has moved her family to a new town hoping for a fresh start. At first things seem to be going well—Aryn is making friends and has even caught the eye of one of the hottest guys in school. But there are dark forces moving under the surface that Aryn cannot see; and her new crush may not be … human.

Twilight meets the legend of Atlantis in this gripping graphic novel from writer Joelle Sellner and artist Abby Boeh.

My Review is based on an uncorrected proof via Netgalley – Thank you Joelle Sellner and Diamond Book Distributors for the ARC.

I decided to read this comic because the synopsis caught my attention. I found the art work to be bright, colourful, clear and visually quite pleasant. Putting aside the cringe worthy insta-love between the two main characters I enjoyed reading this comic. I found the villain amusing and her demise was entertaining.

I think girls between 11-13 would eat this comic up. What tween doesn’t want a sexy teenage Mer-person to instantly fall in love with them and offer them a new magical home and the chance to be a Mer. 11-year-old me would have loved the idea of running away and becoming a mermaid! Hell, 30-year-old me still thinks It might be kind of fantastic.

We follow Aryn as she navigates a new school, new friends, new love and gets herself caught in the villain’s clutches, then back out again, with help.

Aryn bugged me early on in the story and I can’t decide whether I felt she was immature or unhinged. I felt quite detached from the story as she was going berserk at strangers in the school hall and at her father. Actually, her treatment of her father grated on me, but that’s the adult and parent in me. I don’t think the intended audience would feel this way and the younger teens would be siding with her.

Under the cheesy romance and friendship drama there was a deeper story with Aryn realising she loves and needs her family – so that was nice. The comic is only 66 pages long, so all in all it was a light and quick read.

2.5 Stars. It was a bit better than just OKAY, but just too cringey for me to be able to say I liked it as a whole. This one for the young teens only.