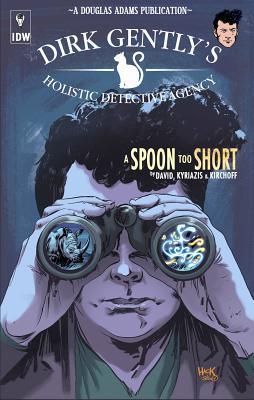 After the many and conflicting versions of the legendary Hitchhiker’s Guide to the Galaxy, Douglas Adams created Dirk Gently: a detective with a belief in the fundamental interconnectedness of all things, a troubled relationship with the laws of probability and quantum physics, and a love of cats and pizza.
After the events of Dirk Gently’s Holistic Detective Agency and The Long Dark Tea Time, but prior to the detective s relocation to California in The Interconnectedness of All Kings, Dirk finds himself investigating a bizarre case of poaching, dumbstruck tourists, and the inner membranes of a rhinoceros nose.” Goodreads View.
Expected publication: September 20th 2016 by IDW Publishing
* * *

My Thoughts: I’m a big Hitchhiker’s fan, the original books, TV and movie adaptations, I love it all! I have attempted to read Douglas Adam’s first Dirk Gently novel, but I only managed to get the first three chapters in. I tried reading it during a rather stressful time and always vowed to try again one day. So when I saw Adam’s Dirk turned into a graphic novel on NetGalley, I couldn’t not give it a go – interconnectedness and all, I was meant to read this graphic novel 😛 :-). Thank you to IDW and Netgalley for a copy to read and review.

The time jumps from Dirk as a child and as an adult, and both story lines were interesting and easy to follow. In the end Dirk solves the case, but we are left with some loose ends to make as curious about the next edition. I will definitely be keeping my eyes out for the next Comic installment of Dirk Gently. I won’t saw much about the case Dirk works on throughout the story arch, no spoilers, but I quite enjoyed it. It was a fast and fun read.

The art work was crisp, clear and easy on the eyes and there were sprinkles of humor the whole way through the story. I felt Dirk worked really well in the graphic novel median. FOUR “I really liked it” STARS.