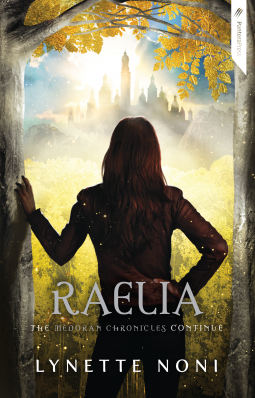 “Life is full of crossroads, Alex. Full of choices.”

Returning for a second year at Akarnae Academy with her gifted friends, Alexandra Jennings steps back through a doorway into Medora, the fantasy world that is full of impossibilities.

Despite the magical wonder of Medora, Alex’s life remains threatened by Aven Dalmarta, the banished prince from the Lost City of Meya who is out for her blood.

To protect the Medorans from Aven’s quest to reclaim his birthright, Alex and her friends seek out the Meyarin city and what remains of its ancient race.

Not sure who—or perhaps what—she is anymore, all Alex knows is that if she fails to keep Aven from reaching Meya, the lives of countless Medorans will be in danger. Can she protect them, or will all be lost?

THE MEDORAN CHRONICLES is a five-part series that offers a new slant on magical parallel worlds – with authority figures who aren’t quite what they seem, jostling friends and rivals and unconvential magic influenced by futuristic technology. Goodreads View.

MY THOUGHTS: The Medoran Chronicles summed up in three words; captivating, endearing and fun. I went from reading the first book straight into the second and now I’ve got an extreme book hangover happening. Bring on Draekora NOW (Book #3) I can’t wait until 2017!

The whole book was fantastic, but the last 20% was a frenzied whirlwind of action and emotion. I was bouncing on the edge of my seat as I flipped through the pages. I was enjoying it so much, that I didn’t want the story to end.

Alex is a fantastic female character. We see her grow throughout the first two books into a force to be reckoned with. She is spunky and full of life. She is loving and loyal. She is both mentally and physically strong. She is brave and determined to do the right thing. We need more YA heroines like Alex.

Her Friends: Bear comes off as a total sweetheart. Dix (D.C.) is another fantastic female character and was a nice to see her become Alex’s close friend, rather than just the background character she was in the first book. Jordan is a cheeky and adorable doofus. Kaiden has total heart throb appeal. Why hello there you slow burning love interest you, how you doin’ cutie pie. When we first met Kaiden in book one I was like “I’m keeping my eye on you, I have a feeling about you” and now I’m really looking forward to seeing (hopefully) Alex and Kaiden’s bond growing further in the next book.

The Medoran Chronicles has been Labeled as mixture of Harry Potter, X-Men and Narnia and I’ve actually seen it compared to Harry Potter on multiple occasions. There are definitely similarities and this is a good thing in my mind, as they are good similarities (if that makes sense). And hell yes I hope The Medoran Chronicles ends up with the same sort of fan base / fame as Harry, cause its an awesome Aussie YA. I think the Medoran Chronicles is the sort off story that people will want to return to and re-read again and again as the years go by. Lynette Noni I applauded your imagination and please keep letting us into the fantasy worlds in your head.

WARNING: the ending if full of Heartbreaking betrayal. Ahhhhhh Lynette Noni why you hurt me so.