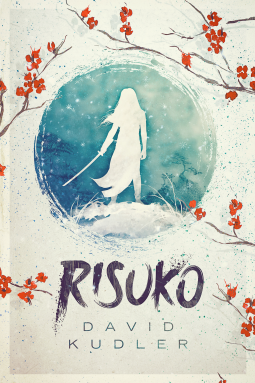 Can One Girl Win A War?

Though Japan has been devastated by a century of civil war, Risuko just wants to climb trees. Growing up far from the battlefields and court intrigues, the fatherless girl finds herself pulled into a plot that may reunite Japan — or may destroy it. She is torn from her home and what is left of her family, but finds new friends at a school that may not be what it seems.

Magical but historical, Risuko follows her along the first dangerous steps to discovering who she truly is.

Kano Murasaki, called Risuko (Squirrel) is a young, fatherless girl, more comfortable climbing trees than down on the ground. Yet she finds herself enmeshed in a game where the board is the whole nation of Japan, where the pieces are armies, moved by scheming lords, and a single girl couldn’t possible have the power to change the outcome. Or could she?

To be published on the 15th June.

Thank you NetGalley and David Kudler for eCopy in exchange for an honest review.

The book opens with a rumbling of tummies and I immediately felt a fondness growing in my heart for Risuko. After the death of Risuko’s father her mother can barely keep enough food on the table for her and her sister. She ends up selling Risuko to a woman who at first seems to just have been travelling through. And so the adventure begins with the protagonist Kano Murasaki aka Risuko (Squirrel) proving herself to be a remarkable girl early on.

Poor Risuko has to get her head around being ripped from her home and dropped in a situation like nothing she’s never ever dealt with before. She discovers new friendships, unravels mysteries and feels the sting of betrayal. I found the story engaging and fast paced. I loved the plot and the whole ‘school’ for creating very special women (yeah I’m not saying any more than that or I’ll give away some of the mystery).

I was immediately suspicious of Lady Chiyome and found it quite sad when Risuko’s mother sold her. Actually the only negative feelings I have towards the book are because of Lady Chiyome. I had no problem with her being cold and calculating, she should be, but by the 70% mark the way she spoke to everyone around her was grating on my nerves. I found her speech to be unnecessarily nasty. She hadn’t seemed so mean spirted at the beginning and it made me end up really disliking her. Unfortunately, I do think this effected my overall enjoyment of the book.

Risuko and the friends she makes, Emi and Aimaru are extremely likable and I look forward to watching the trio grow throughout the series. I think the world Kudler has conjured up could be a brilliant series and I am looking forward to seeing what he does with it next.

Four “I really enjoyed it” Stars.