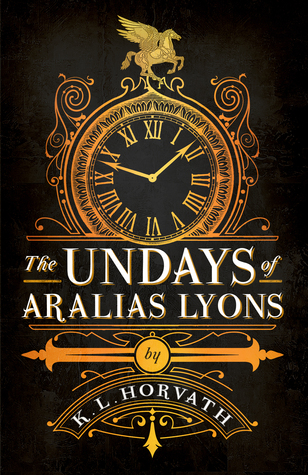 The Undays of Aralias Lyons by K.L. Horvath

I received a copy from the Netgalley in exchange for an honest review.

For centuries the great Houses of Time have watched over the mythical creatures, those who manipulate the past for their own ends and humankind. But now the houses have dwindled and few are left who remember the mandates. One, in fact, is determined to put the world in its proper place—beneath his rule.

To do that, he’s kidnapped Jack Lyons, the youngest of the Time Travelers. And to get him back and defeat Bliss, Lord Aralias Lyons, Jack’s father, will do anything he has to. He’ll fight wicked spiders, an army of clockwork men, let his son suffer and manipulate time itself in order to right what Bliss has put wrong. He’ll even allow the innocent Miss Clara Heartwell to discover more about the Travelers than most mortals know.
Through secret and deadly deals with dragons, battles back in time and with Jack himself, Aralias has to think smarter, act faster, and be more decisive. Because in the end, saving Jack is all that matters … GOODREADS.

Where to start? I guess you could say the main characters were Aralias Lyons, his son Jack, a woman by the name of Clara Heartwell, Nicholas Seraph and the bad guy of the story, Simeon Bliss. Bliss had minions and Aralia’s also had other family members in the mix. Aralias is not quite human. He is a 223-year-old traveler. A guardian of the rotating sun. A traveler of time. His son Jack starts the story out at 9, but becomes 14 by the end.

I found myself flip flopping with this book. From loving it one minute, Aralias riding a Pegasus in battle. To thinking ‘oh shut up’ at Clara and Aralias banter the next.

For me the story didn’t really start to pick up until we see Jack using his powers for the first time and future Jack coming back to warn his dad about Bliss’s Dragon attack – this all happened around the 20-30% – so it was a bit of a slow starter for me.

What I liked: The detailed Victorian-Steampunk-awesomeness! Aralias fight through time to save his son and as it turned out, the whole of time itself. Individually I liked all the characters and felt they all had their own purpose in the story.

What I Didn’t: I love romance in adventure stories, but I didn’t click with Clara and Aralias. I think the father-son-bond would have been more than enough to push this story along. I liked Clara and felt she was important to the story, but the romance between her and Aralias was awkward, unnecessary and frustrating. I think if she just grew to be their adventure loving friend the story would have flowed better.

I think the idea for this story is brilliant and I’m glad I read it. But sadly I wasn’t blown away. 3 I liked it stars.