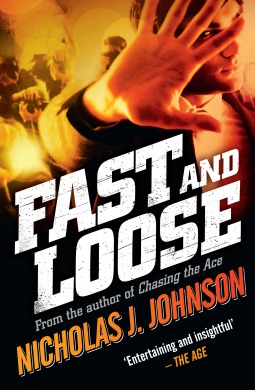 Thanks to the author, publisher and Netgalley for providing me with a free copy of this book in exchange for an honest review.

Joel Fitch used to be a con artist.

That is, until his scam paid off but his life went belly up. Now, two years later, at the ripe old age of 22, Joel has a mattress full of cash and no idea what comes next. The movies never tell you what to do after you’ve walked into the sunset.

Besides, Joel’s past is catching up with him. One of the victims from his con artist days has hunted him down. Far from exacting revenge, though, he wants Joel’s help. Danny Hemming is a TV journalist on television’s trashiest current-affairs program and he’s looking for someone to give him the inside scoop on the latest scams. And he’s not taking no for an answer.

Once again, Joel finds himself in over his head as he enters the murky world of tabloid television. Blackmailed into helping Hemming uncover and expose the country’s biggest swindlers, Joel is making more enemies than ever.

I liked this book and the fact that I enjoyed it even though it wasn’t filled with forbidden or unrequited love, fantastical creatures or other worlds, like the books I normally read, for me shows how good a story teller Mr Johnson is.

The main characters; Joel Fitch a 22 year old millionaire ex-con-man and Danny Hemming TV “Journalist” with his eyes on the top producers’ job – Neither character is really all that like-able, but they don’t need to be. This book is fast paced, easy to read and flows well. It is set in Sydney, so it’s just down the road from me (kinda). I found it interesting taking a peek into a criminal world that goes on every day under all our noses. Now I’m not stupid, I know this stuff goes on, but obviously not everyone does as the Con-men out there are still thriving.

After decades of rubbing shoulders with fraudsters and liars, he now works as a performer, writer and consultant, educating the public about the tricks of the con artist’s trade.

His live shows have featured at corporate events, schools and private events simultaneously entertaining and educating audiences about con artists and scams.

As an expert on fraud and deception he has appeared on A Current Affair, The Project, Sunrise, Kid’s WB, Today, Radio National, Triple J and more. He has consulted with everyone from magician David Blaine to Circus Oz.

A critically acclaimed comedian, Nicholas has performed at Edinburgh Fringe, Adelaide Fringe and the Melbourne Comedy Festival where he was nominated for the Golden Gibbo award for best independent comedy.