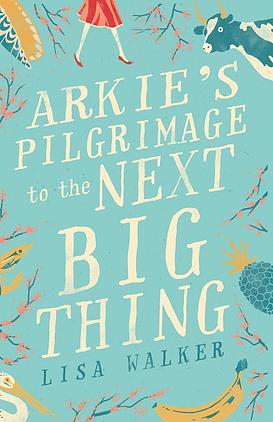 Arkie’s Pilgrimage to the Next Big Thing by Lisa Walker

Thank you to Net Gallery, Random House Australia & Bantam Australia for allowing me to read and review this ARC.

A delightfully funny and inspiring novel about a very modern pilgrimage, and one woman’s chance to rediscover what she’s lost.

‘I watch the highway go by and ponder my situation. I am on the run from my husband’s divorce lawyer, my mojo is still missing in action and my demon ex-lover is lurking . . . But, all things considered, my pilgrimage is going well . . .’

Arkie used to be a trendspotter, running a successful business advising companies on ‘the next big thing’. Until she lost her marriage and her mojo along with it.

Her eccentric new friend Haruko suggests a pilgrimage in Japan. But funds are tight, so instead Arkie’s going on a very Australian trip, to all the ‘Big Things’.

With Haruko as her guide, magic is everywhere. A Buddha appears next to the Big Redback, the Big Macadamia rises from the jungle like a lost temple and inside the Big Shell she can hear a tinkling voice, reminding her of the child she never had.

As her improbable adventure unfolds, realisation dawns: could it be that, despite her celebrated foresight, Arkie’s been missing what was right before her eyes?

The book opens and we find 41 year old Arkie Douglas (female) about to attempt to commit suicide on the one year anniversary of her husband leaving her, which also happens to be New Year’s. She decides that it’s all too much to bear and is going to throw herself in front of a train.

Enter a hip 20 year old Japanese holiday maker by the name of Haruko (female). They spend New Year’s together waiting for a train that doesn’t come, they later discover it stopped running ten years prior.

Arkie offers Haruko a Job after only knowing her for 36 hours, hoping she’ll help her get back into the trend spotting game. Arkie was a big shot trend predictor before her marriage fell apart and she feel to pieces.

That may all sound a bit far-fetched, but a found those initial chapters quite entertaining.

We go on to find out that Arkie’s ex-husbands name is Adam and her ex-lover’s name is Ben. This is where the story started to lose me as I couldn’t feel sorry for Arkie anymore.

If you ignore the infidelity and just look at it as being destroyed by heartbreak and rebuilding ones self, then there are bits and pieces in the story most of us can relate to.

The water child weirded me out at first, mainly the name. I think if she’d been named Prue or Alison for example I probably wouldn’t have minded Arkie talking to the imaginary child she never got to have. The name “water child” makes me think of some demonic little girl trapped down a well in a Steven King novel. But once the deeper meaning of the Water Child was reviled, I felt guilty at finding her weird and ached at Arkie’s stupidity and loss.

The ending was a little anti-climactic. Yes she gets back with her husband, but I would have loved in the epilogue to see her with the child she so desired, be it as a foster mother or whatever.

If you enjoyed reading Eat Pray Love, then you’ll love this book (with added Aussie bonus). I give it 3.5 stars, it loses half a star as the ending didn’t satisfy me.

See lady’s we don’t need to go to Italy or an Ashram in India to find ourselves, after a mid-life crises we can get lost in ourselves and a simpler time enjoying Australia’s Big Things.

I’m going to go see the big Scotsman next time I’m in Adelaide, just to say I’ve been to the original.