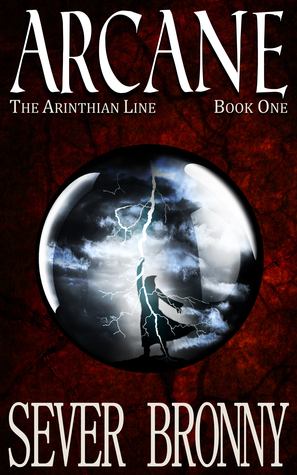 Warlocks before their time …

Fourteen-year-old Augum and friends Bridget and Leera dream of becoming warlocks. But with a kingdom in total chaos, it will take courage, sacrifice, and an iron will to make that dream come true.

The Lord of the Legion, a vicious tyrant, has overthrown the king in a relentless and murderous quest for seven mythic artifacts–and Augum’s mentor, the legendary Anna Atticus Stone, possesses one. While Augum struggles with demons from a painful childhood, a betrayal puts him, his friends, and his mentor through a harrowing ordeal that threatens to destroy them all … and change the course of history.

Arcane, the debut novel in the fantasy adventure series The Arinthian Line, follows three friends as they navigate an ancient abandoned castle, endure grueling training, challenge old mysteries, and learn that a bond forged in tragedy might just be the only thing to save them from a ruthless enemy.

I received a copy of this book from the author, through the Goodreads Group “YA Lovers” in exchange for and honest review. So first, I am going to say Thank you!

Augum; I really liked him. He had it tough as an abused orphan slave boy, until he ended up in the care of Sir Tobias Westwood. Westwood taught Augum to read, hunt, etc. and it is thanks in large part to Westwood that Augum survives to end up with Mrs Stone. Augum has spent all of his life ridiculed and beat up on for being a gutter born orphan and it is beautiful to see that turn around for him as he finds true friendship.

Mrs. Stone; the awesome elderly super powerful bad arse Mrs. Stone. I loved her. Go Grandma, Go, Go. I think it is probably the mother in me that loved her as the hero / saviour in this novel so much (I would be interested to see a teenage boy’s response to her character)

Bridget & Leera; Augum’s back up besties. I quite liked the girls and think that they balanced Augum out nicely. Leera got to kick some butt in the book alongside Augum and I hope that in the future books they get their chance to shine independently.

Prince Sydo; I have to mention him as, Sydo is nasty spoiled foul mouthed brat and I hated him. I think you are meant to hate him, but I found him really disrupting my enjoyment of the story at times. I hope he wakes up to himself in the next book.

The story follows 14-year-old Augum. I found the story a bit hard to get into at first and some of the chapters lagging early on and towards the middle as we are getting crammed with background information. There are some cool plot twist along the way and we get a new style of magic with the Arcane discipline. Once I got into the vibe of the book and stomached all the world building, I really started to enjoy the story, but I cannot really say too much about the story without giving all the twists away.

So I will just say the Last 20% of the book was a fantastical rush. The end of the book is an exciting frantic flurry of action, with a brilliant ending, bring on the next instalment Mr Bronny.

I am going to knock this up as number one for my Debut author challenge; it is Mr Bronny’s first book and was published last year. I was intending to purchase any of the books I read for the debut author challenge and I was given this one, but I think as I am going to buy the next book Riven (The Arinthian Line, #2) due out in February that it counts.

2 thoughts on “Arcane (The Arinthian Line, #1) by Sever Bronny”