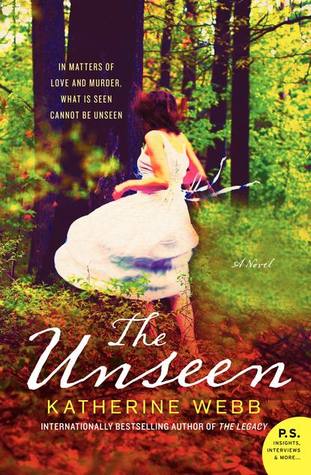 The Unseen by Katherine Webb

A vicar with a passion for nature, the Reverend Albert Canning leads a happy existence with his naive wife, Hester, in their sleepy Berkshire village in the year 1911. But as the English summer dawns, the Cannings’ lives are forever changed by two new arrivals: Cat, their new maid, a disaffected, free-spirited young woman sent down from London after entanglements with the law; and Robin Durrant, a leading expert in the occult, enticed by tales of elemental beings in the water meadows nearby.

Quickly finding a place for herself in the underbelly of local society, Cat secretly plots her escape. Meanwhile, Robin, a young man of considerable magnetic charm and beauty, soon becomes an object of fascination and desire. Sweltering in the oppressive summer heat, the peaceful rectory turns into a hotbed of dangerous ambition, forbidden love, and jealousy—a potent mixture of emotions that ultimately leads to murder

*** The synopsis does not mention any of the 2011 characters; it only refers to the historical 1911 ones, Cat, Hetty, Robin & Albert. The synopsis gives a hint at the things that Leah (2011 character) uncovers.***

The Book starts of in 2011 when the body of a WWI soldier is found near Ypres, in Belgium. Leah is a freelance writer and her ex Ryan works for the Commonwealth War Graves Commission, he contacts Leah thinking she might be interested in the no named soldier for a story.

With the dead soldier, there are two extremely well preserved letters. Leah is intrigued immediately. After reading, the letters she wants learn as much as possible about the dead soldier and get as far away from Ryan as possible. This sets her off researching the Canning’s of Cold Ash Holt, where the letters were sent from and starting the whole story in motion.

It took me a bit to settle into the 1911 to 2011 jump the story kept doing, but enviably I was drawn in and it turned out to be a real page turner. I was rather angry at the book when my favourite character was murdered, I knew it was going to happen, I pleaded with the book that it would not, then was shocked by how it was done. I loved the 1911 world, and at first thought, I would have been happier to be reading the whole novel in that time. In the end I ended up growing to really like Leah.

So my fave 1911 character is killed off (and I am still giving the book 5 stars), at least my fave 2011 character gets a happy ending.