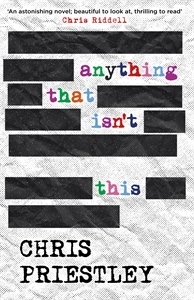 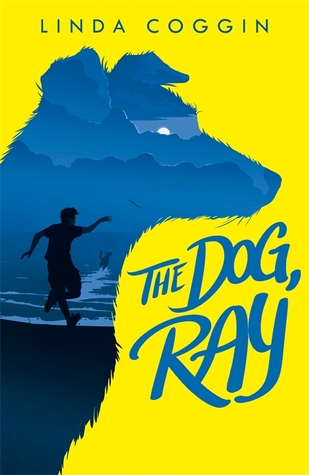 Thank you to Ms Coggin and Hot Key Books for giving me a copy to read in exchange for a honest review.

“When my death came, it was swift. Swift as a racing horse.”

Twelve-year-old Daisy has just died in a car crash. But in a twist of fate, and through a heavenly bureaucratic mistake Daisy ends up, not where she is supposed to be – but in the body of a dog. Daisy may now be inhabiting a dog’s body, but inside she is still very much Daisy, and is as bouncy, loyal, positive, energetic as she ever was.

Daisy’s only thought is to somehow be reunited with her parents, who she knows will be missing her. And this is how she meets Pip, a boy who is homeless and on his own journey, and a lasting, tender and very moving friendship between boy and dog/girl is formed.

A charming and beautifully written story with a bit of quirk and a lot of heart.

Yes, this book is a story of death and reincarnation, but it’s also a story of love, friendship and second chances. It is heart-breaking and heart-warming all at the same time. It is quite an easy read, that has a nice flow and fast pace.

In Taking the wrong door, Daisy who was a twelve-year-old girl, goes into a new life as a new born puppy with all her memories. The door she was supposed to take would have erased her memories, wiping her slate clean.

Dog Daisy is determined to get back to her human parents and recreate some former resemblance of her old life – this doesn’t go very well.

A sequence of events (I don’t want to give too much away!) finds Daisy out on her own and struggling to stay alive a stray dog. Fate and a drifter named Jack bring Pip and her together. It is Pip who gives Daisy the name Ray (as in a ray of sunshine), which is the first step in Daisy’s healing process.

Pip is a fourteen-year-old boy who has run away from his foster carers on a mission to track down his father.

Pip and Ray need each other and they form a deep and pure bond.

There are plenty of twists and turns in Pip and Ray’s adventure/search for Pip’s dad and even though it’s not what he imagined, Pip gets a happy ending.

Slowly Daisy slips away as she comes to terms with her death and embraces the life of Ray. In the end she is at peace and happy.

The way Ms Coggin wrote the way Ray thought was believable and I felt she captured the heart of a dog beautifully in this book.

It is a sweet story with some beautiful characters that I don’t think I’ll forget any time soon. 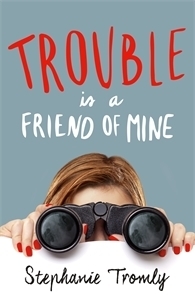 Trouble is a Friend of Mine by Stephanie Tromly

Thanks to the author, Hot Key Books and The Five Mile Press for giving me a copy in exchange for an honest review.

“Of course I didn’t like Digby when I first met him. No one does.”

The first time Philip Digby shows up on Zoe Webster’s doorstep, he’s rude and he treats her like a book he’s already read and knows the ending to.

But before she knows it, Zoe’s allowed Digby—annoying, brilliant, and somehow…attractive? Digby—to drag her into a series of hilarious, dangerous, and only vaguely legal schemes all related to the kidnapping of a local teenage girl. A kidnapping that might be connected to the tragic disappearance of his little sister eight years ago. When it comes to Digby, Zoe just can’t say no.

But is Digby a hero? Or is his manic quest an indication of a desperate attempt to repair his broken family and exorcize his own obsessive-compulsive tendencies? And does she really care anyway?

This is a contemporary debut with razor-sharp dialogue, ridiculously funny action, and a dynamic duo you won’t soon forget.

After her parents get divorced, high school junior Zoe Webster moves with her mother from Brooklyn to upstate New York, determined to get back to the city and transfer to the elite private school her father insists on. But then she meets Philip Digby–the odd and brilliant and somehow attractive?–Digby, and soon finds herself in a series of hilarious and dangerous situations all centred on his search for the kidnapper of a local teenage girl who may know something about the tragic disappearance of his kid sister eight years ago. Before she knows it, Zoe has vandalized an office complex with fake snow, pretended to buy drugs alongside a handsome football star dressed like the Hulk, had a serious throw down with a possible religious cult, challenged her controlling father, and, oh yeah, saved her new hometown.
For fans of John Green and David Levithan, this is a crime novel where catching the crook isn’t the only hook, a romance where the leading man is decidedly unromantic, a friendship story where they aren’t even sure they like each other, and a debut you won’t soon forget.

My first thought upon finishing this book was “God, I hope they do a sequel! I want to know what Digby finds out off of Ezekiel about his sister.”

I think the synopsis above comprehensively lays the story out. If your not hooked by that hook, then I’m not sure what I can tell you. I’m giving this book Five Stars. I had a lot of fun reading it.

Hot Key Books labels this book as 50% Mystery, 30% Humour, 20% Friendship. There is a twisting and turning Who-Done-It-vibe the whole way though. Teenagers just trying to survive being teenagers. Heart warming moments. Multiple creepy bad guys. And tonnes of fun.

By the end of the second page I was hooked on the story and hooked on Digby “the local troublemaker”. Sixteen year old me would have been eating her heart out over Digby.

Right from the start Digby causes Zoe grief and gets her into trouble, and that trouble is addictive. The way Digby sasses every one rubs off on Zoe and it’s for the better as she finally stands up to her ass of a father.

While the kidnapping of the local teenage girl is solved. The mystery of Digby’s little sisters disappearance deepens and we are left with a Kiss and open ending to the book.

I loved Digby, Zoe, Henry and Felix. Especial Felix when he comes flying out of the Ambulance towards the end – Ok I’m just going stop, I wouldn’t want to give any of the surprises away.

I tweeted Mrs Tromly in regards to the unfinished business at the end of book and bless her she tweeted me back within minutes saying that YES, a sequel named Trouble Makes a Comeback will be out next year. I’m excited.

Stephanie Tromly was born in Manila, grew up in Hong Kong and now lives with her husband and son in Winnipeg. She is working on her PhD in English Literature.